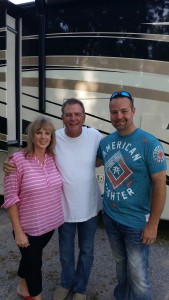 In a surprise phone call received last week, RV General Store, located in Newcastle, Okla., was asked to provide a new motorhome for the “Celebrity Motor Homes” production crew to use as a substitute coach in a segment they were filming with celebrated comedian Bill Engvall. According to a press release, Engvall’s personal coach broke down while on its way to Oklahoma City, there was no time to reschedule the shoot, the production crew was already on site and Engvall was only in town for a few hours.

After receiving the call from the producer of the show, RV General Store mobilized its team and prepped a high end Legacy diesel motorhome. General Manager Darrin Abel then quickly delivered the motorhome to the film crew at the remote location. “It was amazing,” said Abel. “Practically everyone at the dealership pitched in and we were able to meet their request faster than they ever expected.”

“Celebrity Motor Homes will begin airing in September and this episode will likely run by the end of the year,” said Abel.

While the crew shot over eight hours of footage in and around the motorhome, the show producer informed Abel as to when Engvall would be arriving and invited the owners of RV General Store back for a personal meet and greet. Coincidently, Abel already had tickets to Engvall’s show later on that evening, so he and his family jumped at the chance to meet one of their favorite comedians.

“He absolutely could not have been nicer to me and my family,” stated Abel. “He spent 15 minutes just talking to us like a neighbor, asking about our family and our interests. He took a particular interest in our son, who plays college baseball because he said that he too played baseball when he was younger and he enjoyed talking sports with our son”.

RV General Store is a full service RV dealership located in Newcastle, Oklahoma. The company is in the midst of building a brand new location for sales, service and parts. The dealership carries both towable and motorized RVs and features quality brands with over 150 new and used RVs in stock. For more information visit www.RVGeneralStore.com online.