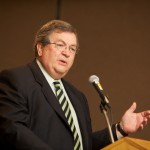 Recreation Vehicle Industry Association (RVIA) President Richard Coon told members during a Committee Week luncheon that an ad hoc committee’s exploration into combining the three industry shows into a potential “RV Industry Week” – an idea supported by many across the industry – has essentially been tabled, at least for now.

A major obstacle (see earlier posting) was presented by the Recreation Vehicle Dealers Association (RVDA), which stated that it was locked into the Rio All-Suite Hotel & Casino in Las Vegas through 2014 for its annual RV Dealers International Convention/Expo and Paris/Ballys for 2015. In a separate press release, RVIA said that it was moving to reschedule the Louisville Show to late September/early October pending further review by the ad hoc committee and a nod from the Kentucky Exposition Center concerning the proposed new dates.

During the luncheon, Coon elaborated on the thought process performed by the ad hoc committee as it examined options.

“You know there’s been lots of talk about combining RVDA and RVIA shows,” Coon told RVIA members at the June 12 event held at the Willard Intercontinental Hotel in Washington, D.C. “So what we did back in February is form an ad hoc show committee – a separate and broader group from the RVIA Show Committee. This group, made up of manufacturers, suppliers, associations and some dealers, looked at the possibility of combining all three shows – RVIA, RVDA and the Elkhart Open House in one location for a solid week in order to have something we’ve termed ‘RV Industry Week.’”

Coon noted that the committee also reviewed several other options, including relocating the National RV Trade Show from its long-time venue in Louisville, Ky. However, in looking at various facilities when it met in Indianapolis in February, it became clear to Coon and others that the facility would not work – despite the fact that it’s closer for manufacturers – because it’s simply not big enough.

Considering that it would be an earlier show, outdoor sites were also considered for overflow purposes, but “nobody really wants to be the ones to exhibit outside,” according to Coon.

“So, we’re going to pull that ad hoc committee back together again and discuss this with them and we’re going to try to figure out if it makes any sense,” added Coon. “But I do think we have to face the fact that this industry has shrunk 30% in terms of manufacturing since 2007. Suppliers and dealers aren’t any better off. And the other thing we have to face is the fact that things are getting more and more expensive – from airline tickets to everything else.

“So, you know, what’s the value proposition of going to the shows? How much time have you got to spend? So, that really needs to be looked at hard and get the industry together and try to figure out what we can do.”