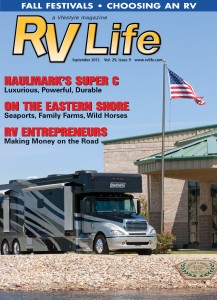 EDITOR’S NOTE: RV Life magazine, now the nation’s only regional RV consumer publication, wound up with a visible role in the movies recently, much to the enjoyment of Publisher Toni Knudsen. The movie, “Rudderless,” with actor William H. Macy, took center stage recently at the Sundance Film Festival. Knudsen and her husband, Diesel, reside in an RV Park where the event is held. This column appeared in the March issue of RV Life.

I’d like to share a fun story with you about RV Life magazine. Last spring we received an e-mail from Anne Stimac of A-MAC Placement, who handles product and brand placement in movies ready to be filmed. She had googled “RV magazines” and RVLife.com showed up at the top of the search results. Anne checked out our website and went through the digital edition of the magazine. She then contacted us for a few back copies of RV Life to use in a movie being filmed in Oklahoma called “Rudderless.”

The director of the movie is the well-known actor William H. Macy, who also helped pen it with seasoned screenwriters Jeff Robison and Casey Twenter. It stars Billy Crudup as a grieving father who forms a band using his deceased son’s original music in an attempt to find peace after his tragic death.

Anne said there would be a few scenes in a music store owned by Del, played by Laurence Fishburne.  Anne explained, “He’s always dreaming of going RVing with his wife after he sells the music store, so he likes reading RV magazines.” We sent Anne eight different issues for the scenes and crossed our fingers that RV Life might make it into the movie. Anne mentioned that it would probably be late 2013 before she had information about when and where the movie was coming out, so we resigned ourselves to being patient (kind of).

Let me shift gears a little bit. My husband, Diesel, and I live in Park City, Utah, where the Sundance Film Festival takes place every January for 10 days. Over 12,000 independent films are submitted to the festival, but fewer than 200 are chosen to be shown. In late December, I was looking through the 2014 festival program to review the movies we wanted to see. Imagine my surprise to see that “Rudderless” was chosen as the festival’s closing film, which is quite an honor.

Luckily, Diesel and I were able to buy tickets to see “Rudderless” on January 25 and we looked forward to finding out if RV Life had made the “cut.” The film was shown in Park City’s largest venue, The Eccles Center, holding 1,200 film lovers. We sat in the second row — great seats — and planned to keep a sharp eye out for the music store scenes with Laurence Fishburne as Del. The first scene in the music store showed the back of Del’s head. Sitting comfortably on a huge sofa in the middle of the store, he was holding up a copy of RV Life and reading the Yellow Pages, circling different things. The magazine was easily recognizable!

The next scene had a copy of the September 2012 issue on the counter next to the cash register. The camera zoomed in on the cover, which took up the whole screen. It had a beautiful Haulmark Class C motorhome on the front. The lead actor, Billy Crudup, touched it and said to Del, “Is this your dream?”  I was so shocked, I didn’t hear what Del said in response, but it was something like, “I’m going to take my wife RVing when I sell the music store.”

And the last scene showed a copy of our 30th anniversary issue (January 2013) sitting on the counter. RV Life was even listed in the credits at the end of the movie. Needless to say, we were thrilled with the exposure for RV Life, but what was even more thrilling was having the RV lifestyle play a small part in the story. Hollywood is starting to take notice — finally.

Without giving away the plot, the music performed in the film was all original; the performances of Billy’s band were excellent, and there was humor, drama and great acting. I’d definitely put it on your list of “Things to Do” when it comes to the big screen. I’ll keep you posted as soon as we hear the news of a release date.  In the meantime, stay safe on the roads and keep RVing!