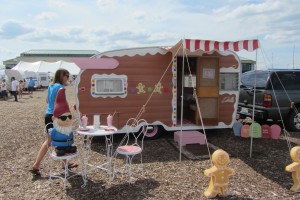 Some 1,000 people Saturday (Aug. 22) attended the RV/MH Hall of Fame ”Family Fest” that featured the Kelly Miller Circus, vintage RV and custom car shows along with music from the band Southern Straightaway.

”The event did exactly what we wanted it to do,” said Jeff White, Hall vice president and director of operations. ”A lot of people who live in the Elkhart area haven’t been to the Hall of Fame before. We wanted to bring them out to show them our facility and our conference center so they will think about us when they have weddings or class reunions and things like that.”

About two dozen vintage RVs were on display featuring such antique units as an early 1960s Shasta Airflyte decked out with ”ginger bread.”

A 1955 Kaiser Manhattan automobile owned by Jim and Marilyn Edds of Middlebury, Ind., received the Best of Show designation in a display that featured about two dozen souped-up cars.

”This is our first annual Family Fest,” said Judy Jankowski, vice president of development. ”We will be doing it again next year. People were very complimentary of the venue and the kids were able to take pony rides, elephant rides and camel rides.”