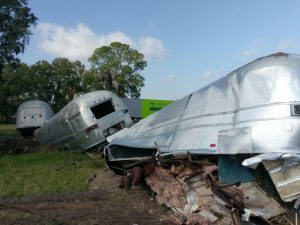 Demolition of the “Airstream Ranch” in Tampa

The controversial “Airstream Ranch” — a curious row of partially buried Airstream travel trailers created by Frank Bates in 2007 off I-4 near his Bates RV dealership in Tampa, Fla. — is being torn down.

Swinging the wrecking ball is RV One Superstores Inc., which purchased Bates RV in 2013 and reopened it as Tampa RV. Founded in 1984, RV One also has locations in Orlando, Fla., Albany and Buffalo, N.Y., and Des Moines, Iowa.

Don Strollo, president and CEO of RV One, said the company has some ambitious plans for a portion of the property where the Airstream Ranch had entertained passersby for a decade. In its place, RV One will build an Airstream museum and Airstream of Central Florida standalone dealership. The 17,000-square-foot facility is scheduled to open in December of this year.

In conjunction with construction of the new Airstream facility, the existing Tampa RV dealership adjacent to the site is being entirely reconstructed with an even bigger facility and new grounds. It’s scheduled for completion by the end of the year as well.

“The Airstream trailers coming out of the ground do not represent the end of anything for us. It s represents the beginning of new opportunities and exciting growth for the area, which will be honoring the spirit of Airstream and American travel in a much bigger way. The facility will be a national destination,” said Strollo. 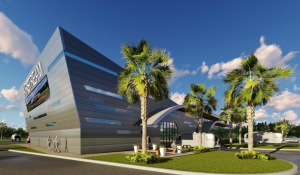 The new Airstream of Central Florida “will stand even taller and more prominent than those old trailers coming out of the ground,” he added. The facility will feature a museum dedicated to Airstream’s iconic founder, Wally Byam, as well as an interactive display called the “Airstream Experience.”

“We are thrilled to be bringing this focused growth to the Tampa area. Hillsborough County has been very professional and welcoming to our plans and great to work with,” said Strollo. “The economic and civil planning teams within the county seem to have a positive and proactive outlook for the area. We are glad to be here.”

His brother, Matt Strollo, who serves as vice president of business development for the company, said RV One’s growth since acquiring the dealership four years ago is evidence of its commitment to the Tampa area. A third brother, Mark Strollo, is the senior vice president and lives in New York.

“I moved from Orlando to Tampa in 2013 for this very purpose,” Matt Strollo said. “Our family has a long tradition and history in the RV industry. The corporate outlook on ‘consumers as a number’ doesn’t sit well with us. The personal attention we provide customers rivals that of any of our competitors, and it’s proving out. In 2013, Bates RV generated $13 million in sales at this location. In 2016, we generated just shy of $100 million here. Personal attention is the key and is something we offer.”

Ultimately, the company plans future expansion with a 94-acre parcel next door, which will feature a third dealership and 300-site luxury RV Resort. The completion of that project will make the site one of the largest RV dealerships in the world, Don Strollo noted, with more square footage under roof and more RVs on display the any other dealer in Florida.

Strollo noted the company’s Des Moines location also is undergoing a similar project, adding that the company expects to retail more than 8,000 RVs nationwide in 2017, representing approximately $400 million in sales.