The second year of ESPN’s hugely popular campaign to promote its NBA coverage has put RVing at center court and attracted thousands of fans to tour the official NBA/ESPN RV (pictured below). 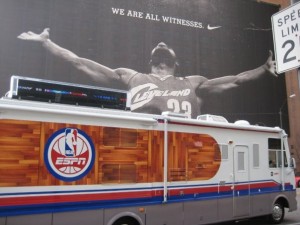 Top NBA stars and personalities including Shaquile O’Neal, Jason Kidd,  Mark Cuban, Gilbert Arenas and Dwight Howard appear in the spots, road-  tripping to games alongside ESPN broadcasters Mark Jackson, Mike Breen,  Stuart Scott and Jeff Van Gundy. The funny television spots ran throughout  the regular NBA season across all ESPN networks and on ABC. They have  also become YouTube hits, according to a release from the Recreation  Vehicle Industry Association (RVIA).

In addition to the TV spots, ESPN teamed with the NBA to start the “NBA on  ESPN RV Tour,” a non-traditional marketing initiative that brings the  official ESPN RV to NBA games, where fans are invited to tour the “one-of-  kind, self contained, traveling fanfest” as well as to meet with ESPN  personalities, play interactive games and shoot hoops using the basket on the back of the unit.

The RV Tour is not only popular with fans attending NBA games, but also with the virtual fan community. The Facebook fan page  “NBA on ESPN RV Tour” boasts more than 14,300 fans who log on to watch  bonus short videos of players’ shenanigans in the RV and share pictures of  themselves alongside the RV at NBA games.

“For the second straight year, the popular ESPN/NBA campaign has put  NBA stars and sportscasters together in an RV, bringing an awareness of  RVing to millions of Americans,” said Gary LaBella, RVIA vice president  and chief marketing officer.  “Not only are the ads and short videos a lot of  fun to watch, but they also mean great exposure for the RV industry. ”

To view the short videos,  visit:http://promo.espn.go.com/espn/specialsection/yournbadestination/#.  Or on Facebook, search for “NBA on ESPN RV Tour” and become a fan.