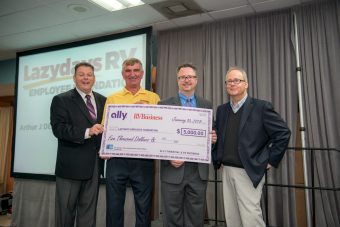 The award, facilitated by RVBusiness magazine as part of the trade journal’s annual RVBusiness Top 50 RV Dealer Awards program, was formally presented in early November at a reception during the Recreation Vehicle Dealers Association (RVDA) International Convention/Expo in Las Vegas.

“We are honored to have received the esteemed Ally Financial Decio Humanitarian Award,” said Lazydays Chairman and CEO Bill Murnane. “Our Lazydays Employee Foundation has donated more than $1.7 million since 2005 to charities serving at-risk children and is proud to support the Florida, Colorado and Arizona communities.”

“Ally is proud to recognize Lazydays for its dedication to making its communities stronger and safer,” added Bill Thompson, Ally’s executive director of RV sales for the eastern U.S., who was on hand for the early morning meeting and for the presentation with RVBusiness of a $5,000 check toward additional Lazydays charitable outlays. “This extraordinary RV dealership and its employees ‘do it right’ for their communities day after day, and we celebrate their incredible example of giving.”

RVBusiness Publisher Sherm Goldenberg told the crowd that neither his staff nor the industry veterans who make the RVB Top 50 selections were surprised by the fact that Lazydays was again named to the annual roster of RVBusiness Top 50 dealers, given the legendary dealership’s reputation as a “stand-up outfit with a reputation for doing the right thing” with regard to consumer care. And there was a general consensus among the judges that Lazydays was a worthy choice for the special award, named after Art Decio, the philanthropic-minded founder of Skyline Corp.

But the most surprising twist, he added, came in early November when Lazydays informed attendees at the Las Vegas awards reception that the Tampa-based dealership, in addition to its donations to existing charities including an emergency foster-care shelter, a homeless youth outreach and a medical clinic for homeless children, had also decided to give $350,000 to launch “Bridging Freedom,” the Tampa Bay area’s first long-term treatment facility for young girls rescued from human trafficking.

That said, Lazydays spokesmen stressed that the Lazydays Employee Foundation will continue to throw its considerable charitable weight behind other organizations like “Youth on Their Own,” educating and empowering Arizona’s homeless youth to stay in school; “The Matthews House,” empowering Colorado’s youth who lack significant family support in their lives; and “The Gathering Place,” serving Colorado’s women and their children who are experiencing poverty or homelessness.

Speaking afterward on behalf of Lazydays’s employees, Joe Myers, the foundation’s president, said the gift reflects the employees’ wish “to help the neediest of children” in their respective communities. “This is a contribution from Lazydays’ employees and our supporters to one of the most vulnerable parts of our community,” said Myers. “We are thrilled to be able to do something that will change lives for the better.”