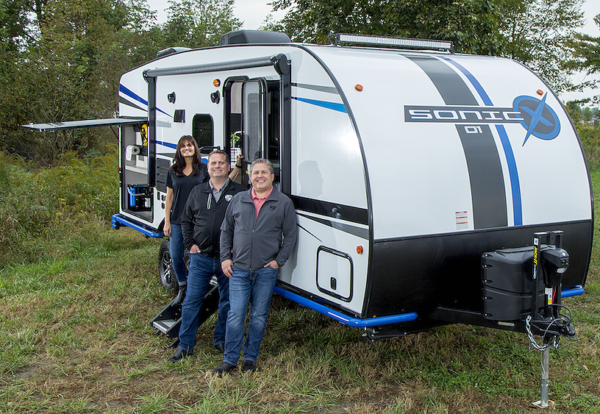 Concept vehicles have been part of the automotive industry’s annual new-model-year debuts ever since legendary General Motors designer Harley Earl unveiled the Buick “Y-Job” at the 1938 National Automobile Show.

One thing all of them have had in common, however, is an inability to translate intricate design studies into mass assembly. So, while certain features of concept cars find their way onto production vehicles few if any of those new concepts ever see the floor of a dealership’s showroom.

And while the RV industry isn’t known for creating such prototypes, the few that have been revealed over the years have likewise fallen victim at least in part to the limitations posed by production lines — except, perhaps, for the Sonic X from KZ RV subsidiary Venture RV — selected by the RVBusiness staff as the 2020 RVBusiness RV of the Year.

Initially created as a design study of sorts for the RV Industry Association’s 2019 “RVX: The RV Experience” trade show last March, the Sonic X was never really intended to go into production. As a testament to the industry’s creativity, however, the completely self-sustainable Sonic X pushed all the buttons expected of a prototype: It showcased new technologies, engaged public interest and, of course, created a lot of “buzz” for the Shipshewana, Ind.-based firm.

“We knew there was nothing else out there with the Sonic X’s capabilities, especially under 6,000 pounds, so we thought ‘let’s build it,’” said Venture RV General Manager Dave Boggs. “Aram (Koltookian, president of KZ RV) gave me the approval and we worked to create a version while keeping the costs reasonable.”

What Venture RV came up with captures most of the features of the original concept vehicle.

“Before we built the prototype, we asked dry campers how much power they needed,” explained Koltookian. “They said 300 watts could get them through. Well, our production unit offers 400 watts.”

And, while those carbon fiber walls of the original have given way to high-gloss laminated fiberglass mounted to aluminum framing, price did not dictate every decision. In fact, the production version has actually been improved in certain instances.

“We upgraded the water filtration system to truly be a one-of-a-kind system that will draw water up to 75 feet away, from a six-foot drop,” said Koltookian. “It first goes through a five-micron filter, then through an active oxygen generator and yet another micron filter. So, it removes all of contaminants — iron, lead, sulfur, all of those things that make water taste foul — and sanitizes the water system.”

The Sonic X is currently available in two floorplans — the rear-bath 26-foot, 11-inch SN220VRBX and the SN211VDBX, which incorporates rear twin beds into its 26-foot, 6-inch dimensions – both of which offer a single streetside slideout.

“It wasn’t an easy choice, by any means,” noted RVBusiness Editor Bruce Hampson. “There were a number of impressive motorized and towable units at Open House this year that could easily have made the cut. In fact, winnowing our list down to just five finalists was a drawn-out debate.”

Among the five finalists:

Be sure to read the November/December issue of RVBusiness for more information on these vehicles as well as the RVBusiness “Top Debuts” selections for the 2020 model year.