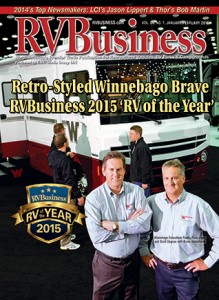 The latest issue of RVBusiness, due on the street this week, showcases the naming of Winnebago Industries Inc.’s retro-styled, Brave/Tribute Class A motorhome as “RVBusiness 2015 RV of the Year,” a designation announced earlier that the novel Class A motorhome earned on the heels of an exhaustive review of new model year product by RVB’s staff at a series of late year trade shows.

“I can’t think of a higher compliment than receiving this prestigious award from RVBusiness magazine,” said Winnebago’s Class A Gas Product Manager John Millis in a press release. “We worked extremely hard as a team at Winnebago to ensure that we were both paying tribute to the fabulous design of our original motorhomes, as well as putting a lot of thought into making the Brave and Tribute a modern motorhome.

“That meant not only including all the features you would expect in today’s motorhomes, but also thinking outside the box to deliver features that were totally unique to the marketplace, such as the sofa in the 26A model that converts to not only a bed, but also a table, or it can fold completely out of the way against the wall for additional storage space.”

“Speaking for RVBusiness,” said RVB Editor Bruce Hampson, “we felt it was important to recognize authentically original thinking on this kind of a scale because Winnebago has boldly stepped into a place in terms of marketing and product design that no motorhome manufacturer has gone before. The Brave/Tribute is a highly appealing and marketable new coach that will likely gain major traction among North American consumers before all is said and done.”

According to the RVBusiness announcement on the award, the article quotes Bob Livingston, senior vice president and group publisher of Good Sam Enterprises LLC, who recently tested a prototype 26-footer for MotorHome magazine.

“Livingston found that people off the street were following him into gas stations to get a better look at what they thought was a renovated vintage 1967 Winnebago Brave. In fact, Livingston says he never had more fun testing a unit than he did with that prototype Brave, which is only one of several reasons why RVBusiness has named this truly novel retro Winnebago Brave/Tribute motorhome RVB’s RV of the Year.”