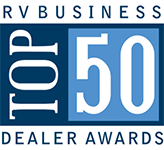 According to Voyager RV General Manager Ward Fraser, the company’s founder and president Rod Friesen was an early proponent of embracing innovation and technology.

Looking back, he noted that “the Internet had a huge impact on the world of business — and Friesen immediately saw this new technology as an opportunity and a way of the future.” Voyager RV, he said, was one of the first RV dealerships to have a fully operational website “and was the first RV dealership in British Columbia to have our full inventory online — as early as 1996.”

And, while Friesen also went on to start a sister company, RVT.com — which, Fraser said, is the second-largest RV listings website in North America — he continued to oversee the implementation of new strategies at Voyager RV until retiring in 2004 and passing the challenge on to his son, Jason, who serves as Voyager vice president.

Where Voyager has again “moved the needle” of innovation is to implement what the company tags “Honest. Simple. Peace of Mind.” Essentially, the fully transparent program is promoted as including no added dealer fees and all RVs are in ready-to-camp condition. A third leg of the program provides for an exclusive 10-day no-hassle RV exchange privilege for peace of mind.

“In the short term, many dealerships would look at all of this as not being financially beneficial. And in the short-term financials, maybe not,” said Jason Friesen. “Looking at things simply, you make more money charging fees, not doing two PDI’s on every unit and by not exchanging a customer’s RV if they aren’t happy with it. However, in our ‘What’s best for the customer’ and ‘Always be transparent’ approaches, these were no-brainer policies for us.”

According to Friesen, numerous customers have already taken advantage of the exchange program “and are even more thrilled with Voyager RV and the RV lifestyle. It costs us time and money to process the exchange — and marketing and selling that 10-day-old RV generally brings lower profits. However, this innovation is a true win-win for the customer and for us.”

Voyager RV has been innovative in other areas, as well. In 2018, the dealership started a structured charitable donation plan called Voyager Cares where the entire staff votes to determine their top seven local B.C.-based charities. During the year, each division of the company donates a certain amount to the charity from each unit sold — with the goal being $100,000 annually. Beyond that, the company continues to select and support other organizations.

Likewise, both Friesens have given back to the industry through their volunteer work. According to Fraser, Jason Friesen was sector chair for four years for the construction of a new trades building and faculty at Okanagan University College, and the Friesen family has made substantial donations to ensure trained technicians are continually learning to help support the growth and innovation in the industry.