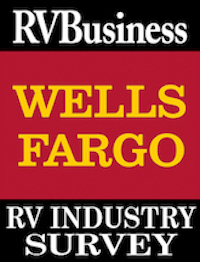 Well, it’s a more positive view perhaps than some industry insiders might have thought back in the fourth quarter of 2019, according to results of the 2020 RVBusiness/Wells Fargo RV Industry Survey, following a year in which wholesale shipments dipped 16% and retail sales of towable and motorized RV’s slowed 6% and 12.9%, respectively.

Here’s some other takeaways from the latest RVB/Wells Fargo survey, the rest of which will be covered in the next issue of RVBusiness magazine:

All things considered, the generally upbeat market outlook reflected in the survey apparently comes as no surprise to manufacturers like Forest River Inc. General Manager Doug Gaeddert, who feels that the industry has, in fact, put a great deal of its high inventory challenges behind it and should be looking forward to a pretty promising 2020.

“Shows have obviously been very good and, frankly, the impact of field inventories now getting into line may well create a few potential issues this spring as a result of the fact that some dealers didn’t purchase enough last year,” said Gaeddert, whose towable-building division is located in Goshen, Ind. “I also think we’ll see some impact on the supplier side – not necessarily just from the coronavirus — but there’s some supplier pressure already to import and produce enough to keep up.

“But I think the inventories being in line, the strong shows and the overall state of the economy and winding down the impeachment process could perhaps result in a real strong market,” he added. “You know, the sun and the moon and the stars are lined up right now. I think every month of 2020 will exceed 2019. So, I absolutely agree with the majority of those respondents.”

Harboring a similarly growth-minded view of the 2020 marketplace is Tim Hyland, president of Wells Fargo CDF’s RV Group, a leading inventory financier that again collaborated with RVB on the pulse-of-the market survey.

“While down slightly, retail activity remained solid in 2019,” he said. “As we step into 2020, we are seeing strong activity at many of the early shows. Inventory levels are in much better shape as we start this year. Dealers are more comfortable with the amount of inventory they have and are now focused on making sure they have the right mix. While we are in an election year, with all the unknowns that brings, early activity and a reasonably good economic outlook are driving positive sentiment for 2020.”