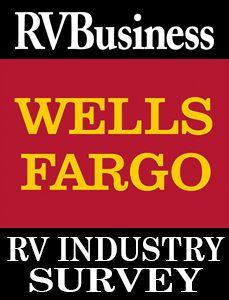 The RV industry, after eight consecutive years of expansion, remains in a growth mode according to a commanding majority of the 195 respondents to the 2018 RVB/Wells-Fargo All-Industry Survey.

Fully 89.4% of those participating in the annual survey saw their companies or divisions grow in 2017 — 46.3% of them by more than 20%. And 88% of the survey participants are anticipating more of the same in the year ahead, with 24.1% looking for impressive 20%-plus gains.

By the same token, survey subjects felt the most pressing priorities for continued industry growth include maintaining product quality at all levels (58.2%), improving consumer care across the board (52.6%), building public and private campground capacities (35.1%) and expediting service and warranty parts deliveries (30.9%).

“While the bulk of the industry is apparently as optimistic as those survey results indicate, there are also plenty of intelligent people out there with some jitters regarding the nation’s economic outlook, the Federal Reserve’s next moves and other aspects of the industry’s early year status,” stated RVBusiness Publisher Sherm Goldenberg. “But, by and large, there’s still a lot of electricity in the air and impressive crowds at spring shows that tend to bolster the opinion of many industry observers — including nearly 90% of the survey respondents — that these are still the best of times for the recreational vehicle arena.”

• 79.6% see the U.S. economy continuing to gain steam as it did last year under the direction of the Trump administration.

• 82.5% expect the unprecedented surge the industry has experienced in first-time RV buyers from all demographic tiers to continue in 2018.

• 53.7% are concerned to some extent with the prospect of high retail field inventories this spring.

• 78.6% consider it a “good thing” that the RV sector’s interests have been merging more lately with those of the outdoor recreation marketplace (marine, archery, sportsfishing, etc.).

• 57.7% can foresee the day when this emerging outdoor recreation trend might impact the blend of merchandise that their companies handle at various levels.

• 93.1% predict that RV manufacturers and suppliers will continue expanding outside the traditional Elkhart, Ind., RV-building zone.

On another relevant subject, fully 70.2% of those surveyed said they were not surprised by the Recreation Vehicle Industry Association’s (RVIA) January decision to terminate its 54-year-old RVIA National RV Trade Show held annually in late November/early December at the Kentucky Exposition Center in Louisville. And almost the exact same percentage, 72%, agreed with RVIA’s decision to euthanize a show that had seen dwindling attendance and sales over the years.

Having said that, just a third of all respondents, 33.3%, felt it was “very likely” that RVIA would be able to develop a valid new all-industry spring event to replace the Louisville Show; the rest indicated that they were “not sure” yet of the spring show’s prospects and, as a result, “needed more information.”

And curiously, more than four of every five — 80.2% — of the almost 200 respondents said they would still like to see the industry, especially RVIA and the Recreation Vehicle Dealers Association (RVDA), work to combine forces on an all-industry trade exposition sometime in the future.

Here’s a sampling of the comments submitted in the essay section, most of which dealt with only two or three of the survey topics:

On the transition in trade shows:

• “I do hope to see the trends continue in all RV sales. I also hope to see an all industry trade show of some sort to replace the Louisville Show due to the fact that suppliers and other RV-related businesses do not have a platform at Elkhart’s September show in which to research or show products.”

• “This new spring show will need to have days open to the retail public. If not, the industry will be leaving 70% of the potential benefit on the table. In that case, there won’t be enough (attendees) left there to make the new show sustainable.”

• “The spring RVIA meeting idea is terrible timing for dealers. Who will send service and sales staff in the middle of busy season?”

• “Two association events, one in the Spring (RVIA) and one in the Fall (RVDA), could be a very good thing for the industry.”

On the prospects for continued industry growth:

• “My optimism about the future of RV sales rests not only on the well-publicized current trends and economic conditions but I take into account that the U.S. population has grown 50% since 1978. If the RV industry does nothing but keep pace with the population growth, that equates to 590,000 annual unit shipments. Further, the age of a Boomer in 1978 was the same as many current Millennials, who are embracing the industry in a big way…”

• “The greatest long-term opportunity for our industry is stepping up the quality of the product and dealer support. 2017 was a record year for the industry both in terms of sales and poor quality. As a Canadian dealer, not only is quality the issue but getting the RIGHT parts the first time.”

• “Unfortunately, I feel that manufacturers have very little incentive to improve on their parts and warranties (or their quality, for that matter). When they are over capacity, their priorities are elsewhere. This unfairly puts the onus for customer service too heavily on the backs of dealers.”

• “As an RV industry marketer (shows, dealers, resorts), I see continued growth in all industry sectors, but only if quality levels are increased by manufacturers. We don’t need to see the churn in owners.”

On improving deliveries of parts and accessories:

• “Create manufacturer’s supply hubs to supply dealers on an as-needed basis instead of spreading stock across many small dealers.”