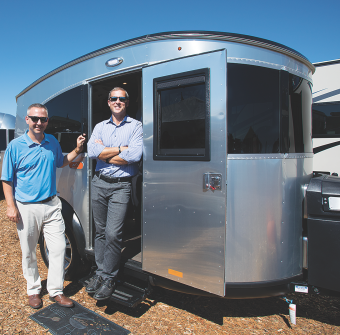 Executives from five RV manufacturers joined representatives of RVBusiness magazine, “Rollin’ On TV” (ROTV) and four corporate sponsors on the morning of Jan. 9 at the Northern Indiana Event Center in Elkhart, Ind., to videotape a special production of the “2017 RVBusiness RV of the Year” presentation during which Airstream Inc.’s diminutive Basecamp — an adventure-oriented 16-foot travel trailer — was unveiled with a flourish as RVB’s “RV of the Year.”

(To view an accompanying video click here or scroll to Video No. 1 on the RVBUSINESS.com home page).

Also profiled on the show, which ROTV will air later this month on both cable and satellite TV to a potential audience of 35 million households, were the towable and motorized finalists, all of which were subject to some pretty intense scrutiny by RVB’s editors during the industry’s three major national shows — “America’s Biggest RV Show” in Hershey, Pa., Elkhart County’s RV Open House and the Recreation Vehicle Industry Association’s (RVIA) 54th annual National RV Trade Show in Louisville, Ky.

The other finalists who had been in the running, encompassing a cross-section of recreational vehicles from a lightweight travel trailer to an luxury Class A, included:

In the end, however, the “last RV standing” was the redesigned Airstream Basecamp, a brand name originally introduced by the Jackson Center, Ohio-based builder in 2007 that lasted but one year on the cusp of the Great Recession. The 2017 Basecamp, Airstream spokesmen indicate, was redesigned specifically to appeal to the hardcore camping enthusiast.

“The original unit was a totally different travel trailer,” said Bryan Melton, general manager of Airstream travel trailers, who was on hand for the TV taping. “It had the same name and a similar look, but embraced a different concept. It was really geared as more of a toy hauler for an ATV. It didn’t have a bathroom. It really wasn’t a true RV.”

“It (the original version) had aluminum cladding over a fiberglass skeletal structure, so it was a little different,” explained Dana Gehman, engineering manager for Airstream travel trailers. “The new Basecamp is 100% all aluminum, all done by hand — just like any other Airstream.”

Yet, it’s still a toy hauler — in a trendy, outdoorsy sort of way that’s been capturing plenty of national media attention.

“When we thought about bringing back the Basecamp, we understood that it’s a totally different buyer that we’re going after today,” said Melton. “This is more for the ‘human-powered’ outdoor adventurer — someone into mountain biking, fishing, kayaking, hiking, snowboarding. The rear hatch allows you to carry this equipment, while it also has all the features that we were looking for — a bathroom with shower, a cooking area, a whole convertible back end that allows for your gear and also for sitting and sleeping.”

Other noteworthy features include an up-front kitchen equipped with a cooktop, stainless-steel sink and refrigerator plus a wireless Bose Bluetooth Soundlink Color speaker. Options include an enclosed patio and rear tent that seamlessly attaches to the roof track allowing for extra outside storage and living area — making it a true “basecamp” for outdoor adventure.

Airstream’s Basecamp also is sized and priced to appeal to a younger buyer. At just 16 feet long with a base weight of 2,585 pounds and a 3,500-pound GVWR, it’s towable by a variety of small- and mid-sized SUVs and crossover vehicles. And with an MSRP of $35,900, it retails for about $10,000 less than Airstream’s 16-foot Sport travel trailer.

“That was the goal,” Melton said. “That, and to go after that hardcore outdoor enthusiast. But we’re also trying to bring our age demographic down and the Basecamp brings Airstream to more households at an earlier age and at a more affordable price point.”

As Airstream President Bob Wheeler noted, the Basecamp in the final analysis “is a fully-loaded adventure waiting to happen.”

A more extensive look at the Basecamp and the other four “RV of the Year” finalists can be found in the Jan./Feb. 2017 issue of RVBusiness, along with profiles on 20 more 2017 RVs selected by the magazine’s staff as the year’s Top Debuts. The awards show, hosted by Colleen Bormann, news anchor for local station WBND, ABC 57, and Ron Stryker of radio station WRBR-FM 103.9, begins airing Jan. 29.