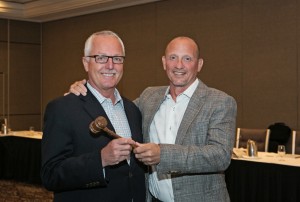 Derald Bontrager, president and CEO of Jayco Inc., was elected Recreation Vehicle Industry Association (RVIA) chairman for fiscal year 2015 during the association’s board of meeting on Sept. 24 at The St. Regis Aspen Resort in Aspen, Colo. RVIA reported in a press release that Bontrager succeeds Doug Gaeddert, general manager for Forest River Inc., who served in the position the past two years.

“The board has elected one of the most well-liked and respected leaders in the RV industry to be the association’s next chairman,” said RVIA President Richard Coon. “Derald is a veteran of the RV industry and has been a very engaged member in the association for many years. In that time, his insight and business expertise at board and committee meetings have been invaluable to the association. I am looking forward to working with him in the coming year.”

Bontrager has served on the RVIA board and the Executive Committee since 2009, holding the positions of first vice chairman, second vice chairman, secretary and treasurer. He has also served as chairman of the Audit Committee and as a member of the Go RVing Coalition, Public and Legislative Affairs Committee, Public Relations Committee, RV Service Training Council and Strategic Planning Committee.

In other actions at their meeting, the RVIA board:

• Approved Roadtrek Motorhome Inc.’s request to have Paul Cassidy replace Jim Hammill as its representative on the RVIA board.
• Approved extending the “Technician in Training” (TNT) pilot program and beginning work toward full implementation of the effort throughout the United States by the end of calendar year 2017.
• Selected Arizona as the site for the 2016 Annual Meeting with the event date and location to be determined.