The Recreation Vehicle Industry Association (RVIA) is asking its members who import from China to review whether those products and materials are included under a new proposed 25% tariff announced Tuesday (April 3) by the United States Trade Representative (USTR).

The list of products and materials represents $50 billion worth of goods. The document is 45 pages long and about 1,300 items are included, with most targeting electronics, aerospace and machinery products.

Michael Ochs, RVIA’s director of government affairs, told RVBUSINESS he is encouraging the RV industry to contact him ([email protected] or 571-665-5860) if anyone suspects their business would be affected by this proposed tariff. The RVIA is preparing written comments to be submitted to the USTR during the public comment period, which ends May 11.

“When making decisions on these things, we hope the administration kept in mind what the effect on the end user and the downstream industries is going to be,” Ochs said. “We’re feeling like not enough consideration has been given to the effect it’s going to have on industries, such as the RV industry, that utilize these products in manufacturing.”

“We’re trying to learn from our manufacturer and supplier members what products do they use that are under these tariff categories being targeted so that we can better gauge the impact this is going to have on our industry,” he added.

It is expected that comments will be filed requesting the USTR to remove items from the retaliation list – which also may prove troublesome, Ochs pointed out.

“One of the other things we also have to look for is that the administration wants to put tariffs on $50 billion worth of products. So if something gets taken off of that list, then they may put other items back on. So we’re concerned about what those might be as well,” he said. 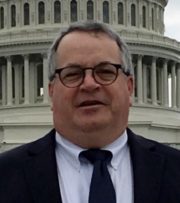 According to the USTR, in compiling the list of products subject to the additional 25% tariff, U.S. officials identified goods that benefit from Chinese industrial policies, including the Made in China 2025 initiative. The list was refined by removing specific products identified by analysts as likely to cause disruptions to the U.S. economy, the USTR stated, and the remaining products then were ranked according to the likely impact on U.S. consumers.

The reason for the proposed tariff is the USTR, following an investigation mandated by Trump last August, has determined that the “acts, policies, and practices of the Government of China related to technology transfer, intellectual property, and innovation covered in the investigation are unreasonable or discriminatory and burden or restrict U.S. commerce.”

Several high profile groups have publicly opposed the administration’s use of tariffs as a tool to change the Chinese government’s trade policies, including the U.S. Chamber of Commerce, National Association of Manufacturers, various agricultural associations and the Information Technology Industry Council (ITI), which represents companies such as Apple, Dell, IBM and Google.

These groups and others warn that these actions will not have the desired outcome, and instead initiate a trade war and ultimately cause severe harm to the U.S. economy. Indeed, this week’s proposed $50 billion tariff announcement is the third such volley after the U.S. earlier issued tariffs on Chinese steel and aluminum, which was soon met by a $3 billion tariff levied by the Chinese government on American goods.

“If history is any indication, these proposed tariffs will not work and will be entirely counterproductive. Tariffs penalize U.S. consumers by increasing prices on technology products and will not change China’s behavior. Instead, the administration should act consistent with international obligations and work with other countries to address systemic issues with China,” said ITI President and CEO Dean Garfield in a release.