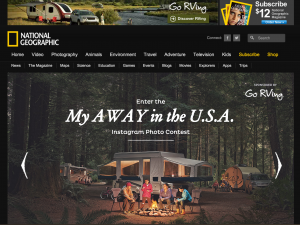 The Recreation Vehicle Industry Association (RVIA) has partnered with National Geographic for a contest as part of Go RVing’s “AWAY” campaign. Called “My AWAY in the U.S.A.,” the contest asks people to submit their photos “from a trip to your special place in the U.S.A — wherever you escape, play, or make memories with the people you love.”

“We know National Geographic readers are already engaged with being in the outdoors, and since the magazine is also known for its incredible photography most of their readers are avid photographers as well. So that’s a great target demographic for us,” Karen Redfern, RVIA’s senior director of marketing communications told RVBUSINESS.com, adding that 707 entries were submitted in the first day alone.

Contest participants must upload their best images to Instagram from April 1 to May 31, with #MyAWAYContest and a caption that describes how they found the place depicted in the image.

The contest judge, Dan Westergren, director of photography for National Geographic Traveler, will determine the winner. Eligible submissions will be judged on the following criteria: Execution of theme (40%); creativity and originality (30%); and photographic quality (30%).

A link on the bottom of the contest’s website page invites people to visit gorving.com.

The entries can be used for Go RVing marketing purposes as well, something Redfern said RVIA makes sure to stipulate in all of its contests. Sometimes referred to as “crowd-sourcing,” the entries represent user-submitted images, video and other content that will populate Go RVing.com’s AWAY microsite and, in essence, tell the story of RVing in a way that will better resonate with non-Rvers.

“It’s always more meaningful when it comes from others rather than just, ‘Oh, it’s just another advertisement,’” Redfern said.

The partnership with National Geographic is one of several the RVIA has with national media as part of the Go RVing campaign. A similar photo contest takes place in the fall during football tailgating season, and Redfern said several events are planned this summer as part of the campaign’s “experiential” efforts in which RVs are on site at a major event and are available for the public to tour. The events, such as country western music festivals and artist fairs by Country Living magazine, all offer a desirable demographic – a segment that is trending younger, Redfern mentioned.

“We were in San Diego for a shoot and we had an R-Pod with us,” she said. “We were in a store parking lot picking up supplies and when we came out a group of teen-aged boys on their skateboards were checking it out, saying ‘This is so cool.’”