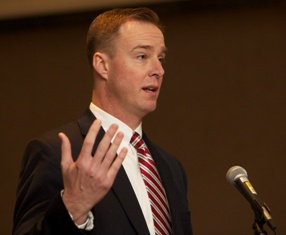 According to a press release, the presentation kicked off with the new “AWAY” campaign creative showcasing the industry’s return to the emotion-driven focus on family fun, affordability and flexibility of RV travel.

Ashurst offered an overview of the 2012 strategic media plan, detailing how the $10.3 million advertising spend for 2012 features a strong mix of proven media and several expanded and new media partnerships.

“The advertising market is changing, and so are the days of the traditional ad buy,” he said. “Our strategic focus for 2012 is to identify advertising partnerships that allow for greater brand extensions than we’ve done in the past – opportunities that will stretch our ad dollars, add value and encourage additional partnerships in the future with like-minded brands.”

Thompson led the public relations discussion by updating attendees on RVIA’s move to bring more of the PR function in-house by using consultants that have been contracted to supplement internal efforts. He touched on several recent successes, including more than 100 newspapers picking up an Associated Press story on the state of the industry, as well as dozens of local print stories touting the early RV consumer show season.

“RVs continued to receive positive media coverage during the winter months, and our work with earned media throughout the year will continue to deliver the message that RVs provide consumers with the opportunity to pursue their passions, build connections through shared adventures, and that there is an RV that fits their needs and budget,” Thompson said.

Thompson showcased several videos highlighting recent consumer media features including national broadcast coverage on Fox&Friends and Rachael Ray, as well as footage from HGTV’s RV 2012, and HGTV’s most popular series House Hunters – a segment featuring a couple looking to settle down in an RV. RVIA worked closely with producers on each of these segments, and have laid the groundwork for additional coverage moving forward.

Thompson concluded, “PR continues to be a driving force behind our ongoing promotional efforts. The PR team and our media consultants are working on numerous projects, and we are extremely confident that despite the ever-present uncertainty in the economy, 2012 will be a banner year in terms of positive media coverage for RVs.”

Additionally, Ashurst highlighted how Go RVing is staying aggressive in the sports category, with a more robust execution with MLB Network. The 2012 partnership, dubbed the “Home and Away Tour”, includes an eight-market stadium tour featuring a custom-wrapped motorhome from Jayco that allows for mobile studio interviews with players and managers in and around the RV. An exciting new partnership has been forged with NFL Network, providing Go RVing a highly visible presence during the network’s popular Game Day Morning. The collaboration will feature editorial and advertising extensions in the league’s new monthly, NFL Magazine.

Additionally, Go RVing has struck a deal with CBS Sports Network that will include RV-specific content as part of packages celebrating unique college football tailgating traditions.