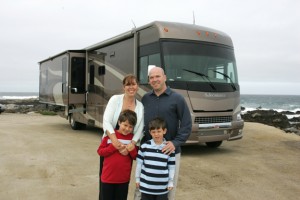 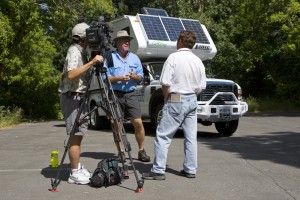 As summer kicks into high gear, spokespeople for the Recreation Vehicle Industry Association (RVIA) are kicking off a busy season promoting RVing to a diverse group of potential customers.

The Herzog family is gearing up to show once again why they are the ideal family to tell the media that RV travel is the best way to see America, according to an RVIA news release. This summer the Herzogs will travel in a Winnebago hybrid RV on a Freightliner chassis powered by a diesel engine and electric motor.

Their trip coincides with the release of Brad’s latest children’s book, “S is for Save the Planet: A How-to-Be-Green Alphabet.” His book details the many environmental issues we face and suggests simple ways to help protect the planet.

Since 1996, the Herzogs, who live in Pacific Grove, Calif., have logged nearly 100,000 RV miles, spending time in all 48 contiguous states. As they travel, their RV is a summer classroom for their sons and an office for Brad as he blogs for GoRVing.com.

The Herzogs have effectively delivered RVIA messaging during countless interviews since they became RVIA spokespeople in 2000. In 2008 alone, these interviews resulted in more than 60 media hits that delivered over 1.3 million impressions. Brad’s blog postings have also received favorable response from RVing followers. The blog, which includes photos and anecdotes about the family’s trip across the country, was so appealing to readers that Brad continued to write for GoRVing.com even after the tour concluded.

RVer, adventurer and RVIA spokesperson Brian Brawdy is making the most of the media’s interest in Americans “going green.” Brawdy outfitted his Lance truck camper with an array of solar panels, a wind turbine and a rainwater collection and filtration unit, making the unit highly environmentally friendly.  Brawdy’s RV attracts a lot of media interest, and allows him to talk to the press about what the RV industry and other RVers are doing to be green.

Over the past weeks Brawdy has been interviewed by several local television stations in Phoenix and Albuquerque, N. M., and has been featured in both the Chicago Sun-Times and the Albuquerque Journal. During his many print and broadcast interviews throughout the country, Brawdy delivered RVIA’s message points while putting a green face on the RVing experience.