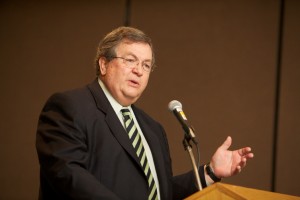 Recreation Vehicle Industry Association (RVIA) President Richard Coon detailed a number of key issues on the association’s agenda that will have long-term implications for the RV industry while addressing members at the March 8 Annual Membership Meeting at Ranchos Las Palmas in Palm Springs, Calif.

“RVIA is working diligently on these important items because they will play a factor in the continued success of our members and the RV market,” said Coon.

Coon said the association is continuing to identify and maximize the potential of global opportunities, noting that in addition to the established markets in North America, Europe and Australia there are potential new markets in China, Brazil and South Africa. “There are tremendous growth opportunities for RV manufacturers and suppliers across the globe,” said Coon. “RVIA is working to make it easier for our members to take advantage of these global opportunities by studying the market potential and gaining an understanding the legislative and regulatory environment in these markets.”

On a related note, Coon pointed to the ongoing efforts to harmonize United States and Canadian RV standards. “Our goal is to have a uniform standard so that American and Canadian manufacturers can do business in a more efficient, cost-effective way,” said Coon.

Coon also said the destination camping market is a new area of focus for the association. An ad-hoc Destination Camping Committee composed of RV and park trailer manufacturers as well as campground industry members was formed to determine the size, scope and potential of this market. “With destination camping taking many forms, defining what it exactly is can be a little difficult, but we do know that it is a growing part of the RV and campground industries that requires our attention,” said Coon.

Coon also told attendees that the RV industry is expected to have its best year since 2007 based on the latest RV wholesale projections from economist Richard Curtin in the spring 2012 issue of RV Roadsigns. “RVIA is projecting 265,200 units to be shipped this year, which would be a 5.1% increase over the 2011 year-end total of 252,300 units,” he said.