RVillage.com, the popular social online platform designed specifically for RVers has reached a major milestone – 100,000 active users have joined the network. The 100,000th member joined at 2 a.m. PDT on July 23, according to a release.

Launched as a beta version in 2014, RVillage.com has experienced exponential growth over the last four years. Every three to five minutes a new member joins the site. Once they create their personal profile, RVillagers can find other RV enthusiasts based on their current location, at any destination or along their way and remain connected through geo mapping technology and social interactive tools.

Active special interest groups within RVillage such as full time RVers, club chapter groups (FMCA, Escapees, etc.) boondockers, snowbirds and others communicate with one another on a regular basis. There are more than 3000 of these groups within the platform already and more keep getting added everyday by the users. 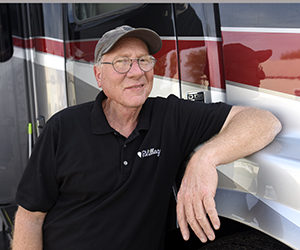 Curtis Coleman, RVillage’s CEO and founder is delighted with the growth and progress.

“This is a huge milestone for any site,” he said. “We’re noticing that the site is growing everywhere, which is good for RVers everywhere. As a result, more and more RVers are able to connect with each other and with those around them. Our data shows that members are using the site more and more every day, which is resulting in our site becoming very ‘sticky.’”

RVillage.com also now has its own built-in advertising management system, which like Facebook’s and Google’s models, supports some remarkable and unique advertising opportunities, according to Coleman. Campgrounds, RV dealers and other RV-related businesses are able to create and display their ads to RVers based on their demographics and interests, but also to those who are traveling in their specific areas, thanks to the geo mapping technology.

In May of this year, the organization held its first RV rally in Elkhart, Ind., attracting hundreds of RV owners from all over the United States and Canada. Rally guests were treated to evening entertainment, tours of six different RV manufacturing plants, a visit to the RV/MH Hall of Fame, and a giant potluck dinner, but most of all the opportunity to connect with each other. They joined together in virtual “villages” – Geeks, Boomers, RVillagers, Big Rig Owners and Boondockers – to link with other RVers with similar lifestyles.

“This was different from other RV rallies,” said Coleman. “And even our rally exhibitors recognized that we were bringing new and unique people to them. It was a huge success. We will be announcing the dates for the next rally very soon. It will be held in Florida at the end of March, 2019.

“RVillage is all about providing a means for RVers to connect and interact with other people with similar interests and travel experiences,” he continued. “We bring people together.”