The dramatic rise in the popularity of RVing is about to get the Hollywood treatment. “RV Nomads – The Motion Picture,” a feature-length cinematic documentary film that explores the full time RV movement as a cultural shift happening across America, is currently in production by Square House Creative and Nomadic Life Films. (To view a video click here or scroll to the right side of the RVBUSINESS.com home page.)

The movie, set for an October 2018 release, is being created as a story built on a hybrid style foundation that combines the elements of a documentary with the entertainment value of an action/adventure film. The project aims to fully detail the epic true story of how hundreds of thousands of people are unplugging from a traditional way of living in favor of minimalist digital nomadism through the RV lifestyle.

“This is a profound and powerful story of freedom,” said the film’s producer, Eric Odom. “You have hundreds of thousands of people, some in their 20s and some in their 70s with plenty in between, completely disregarding a predetermined way of life in favor of a life through which they can live where they want, when they want and how they want. This is all possible thanks to the Internet and the ability to work in a mobile environment. And, as many are discovering, it can be done debt-free, through minimal living and without foregoing the ability to explore more of the world earlier on in life. 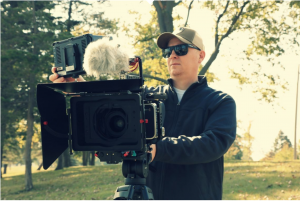 “The movie will tell the story of the full-time RV lifestyle,” he continued. “Of course, full-timers are a small fraction of RVers, no doubt. But they’re a huge driver of messaging for the RV lifestyle, and we’re excited to be able to put their stories in a more cinematic meaningful format. I think it’s going to have a profound effect on the general messaging on what RV living is all about. I’m very confident this is going to be high quality and representative and reflective of the mindset and the spirit driving this full-time nomad movement as it relates to the RV lifestyle.”

The movie’s co-director is Tom Morton from “Morton’s on the Move.” He and his wife Caitlin have a long established presence in the full-time RV community. The nomadic couple lives in a fifth-wheel and also co-manage the “Road Gear Reviews” YouTube channel. Morton is a certified drone operator and manages Windtrap Digital, a company specializing in high-end aerial cinematography. 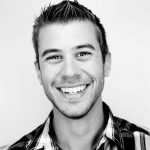 “I would like to see this film provide a true narrative of what the full-time RV movement is like and how it has impacted those involved with it,” Morton said. “In addition, I hope we can shed light on the greater story of the reasons behind the major lifestyle changes many of the cast and individuals in this movement make.”

Morton added that he will be completely immersed in the film’s production, “traveling and living with the cast and crew, sharing bonfires, meals, adventures and misadventures on the road. As co-director I look forward to using the camera to capture these nomads’ stories and piece them together into one epic story to share with the world. I hope this movie inspires others to take a chance, find adventure and live life on your own terms.”

Noting that the movie “creates a scenario in which there are a lot more of this type of storytelling and content coming around the corner, and at a perfect time for the RV industry,” Odom said the film is only the tip of the iceberg when it comes to what he and his partners have planned for 2018.

Not long after production began, several of the YouTube celebrities agreed that their individually created video footage would have a greater impact if it were combined in a shared content development platform and distribution network, and supported by paid subscribers.

Toward that end, and with Odom serving as its president and producer, the group formed Epic Nomad LLC. Holding senior management positions are the Mortons as well as Marc and Julie Bennett from “RV Love” and John and Laura Hebard of “Hebard’s Travels.”

Odom said EPIC Nomad TV deserves special mention, as he likened it to “Hulu for RVers.” Set to debut in August, 2018, through Roku, Amazon Firestick and other streaming and on-demand outlets as well as its epicnomadtv.com website, EPIC Nomad TV will be a premium video content distribution network with content focusing on the RV lifestyle and created by the participating YouTube RV celebrities.

“It just made sense to go ahead and create this network of episodic content – a ‘Hulu for RVers’ or a ‘Netflix for nomads,’ if you will – because we have this network of amazing YouTubers who are getting better and better,” Odom said, adding EPIC Nomad TV will have 10 different channels and new shows appearing daily.

“The movie is certainly the anchor that builds all of it,” he continued, “but now there’s this business model that’s coming into play that really integrates a lot of the content creators in a big way, and makes it a project that they co-own and benefit from in multiple ways. And, I think, it creates a niche content network that doesn’t exist in this community at a time when obviously the RV industry is exploding.” 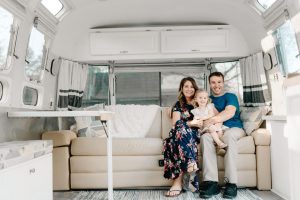 In addition to the Bennetts, Hebards and Mortons, other participating YouTube stars include: Camille Attell and Bryce Cripe from “More Than A Wheelin’;” Kelly Beasley from “Camp Addict & RV Chickadee;” Kyle and Olivia Brady from “Drivin’ & Vibin’;” Dan and Lisa Brown from “Always On Liberty;” Shane Snyder and Audrey Callahan from AudreyMusic.com and “Pixel Me Pink;” Sean and Julie Chickery from “Chickery’s Travels;” Jennifer Leigh from “Peace of the Path;” Robert and Jessica Meinhofer from  “Exploring the Local Life;” and Nathan and Marissa Moss from “Less Junk, More Journey.”

“It’s a great relationship with our content creators,” Odom pointed out, “because we’re teaching them how to use a little better production equipment, and all they have to do is go film the stories. And then our editing team is going to take over on the editing side, and in turn convert these stories into something we could publish per chapter. We’re creating a great group of collaborators who co-own the project, and are taking it on as their own. And they’re some of the most visible people in the full-time RVing social community.”

Odom was quick to point out the movie is “definitely the flagship” of the entire operation. It will premiere Oct. 20 in a refurbished 400-seat theater during “NomadFEST 2018,” which runs Oct. 18-22 in Wellington, Texas, and Odom said tickets are selling quickly as the five-day event also features a conference designed to help content creators improve their videography and editing skills.

“We’ve already sold tickets to something approaching 100 RVs, and have space for a couple hundred more RVs. That campground will have live music, a big barbecue, and a VIP dinner. It’s selling itself without us having to do much of anything,” he said, adding they chose Wellington over film festivals at larger metropolitan areas because it seemed to strike the right chord.

“Really, the essence of the film is to ‘get away,’ and Wellington, Texas, just fits that so well because it’s in the middle of nowhere,” Odom explained. “There’s little connectivity, and it has an amazing fairgrounds with a venue for live performances – including by Audrey Callahan, a full-timer RVer who’s a musician. It’s just the perfect fit to get 400 RVers in a fairground in the middle of nowhere in Texas for four or five days, and go for a conference for content creation, and how to vlog better and use YouTube, and watch the premiere of the movie, enjoy live music and barbecues and rallies, and so on. It couldn’t have been a better scenario to go tell this story of RV nomads in an environment like that.” 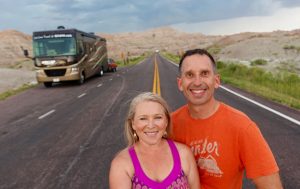 A major sponsor of the NomadFEST is the Escapees/Xscapers RV Clubs, and Melanie Carr, vice president of the membership organizations, said they first heard of the movie because several of their members are part of the cast. Odom approached Carr and her husband Travis, Escapees/Xscapers president, to include their thoughts on the RV lifestyle in the movie.

Saying they quickly realized Odom’s “passion and values were easy to get behind” – an RVer himself, Odom was bit by the RV lifestyle bug a few years ago – Carr said they were all too happy to have Escapees/Xscapers sign on as a sponsor.

“We’re honored to be a part of something that we feel will show just how amazing and unique RVing can be for those who have broken the norm and taken their lives on the road. We’re confident that it will provide inspiration to those who may be considering taking the leap or wondering how they could create an income stream to support their travels,” Carr said.

In addition, RV SnapPad, a brand of Origen RV Accessories LTD, is a sponsor of “RV Nomads – The Movie,” offering financial support as well as having contributed five sets of its flagship leveling and stabilizing accessory for the production company’s 2018 kick-off $10,000 giveaway. The contest, currently running at EPICNomadContest.com, will have more than 75 winners with a wide range of prizes announced later in January as part of the film project’s marketing campaign.

“Once we heard about the RV Nomads project we knew we wanted to be involved,” said Vice President of Operations Devon Wilson. “Eric and the RV Nomads team will be the first to shed some light on what’s fast becoming the new American dream.”