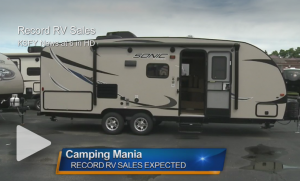 If you’re headed west on Interstate 90 out of Sioux Falls, S.D., to see the buffalo at Custer State Park this summer, chances are you’ll hit some traffic: RV traffic, television station KSFY reported.

Nationally, since the economic downturn in 2009, sales of towable RV’s (including folding trailers, truck campers and travel trailers) rose nearly 47%.

And the impact can be felt locally. Just ask Don Claussen with Leisure Travel Vans.

“Looking at 2016 what we’re saying right now is people downsizing from the big Class A, they had the big Class A motorhomes. They want to be able to get into the state parks that they can’t get into,” he predicted.

And while larger RV sales have increased slowly, smaller, easy-to-tow trailers have been the focus of the major boom.

“Affordability is a huge part of it,” said Schaaps RV Traveland Co-owner Lyle Schaap, “the ease of getting around, Whether it’s our national parks whether it’s across the state to the Black Hills. Or whether it’s out for just day, a short weekend or going away for a few hours .”