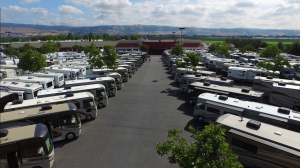 See Grins RV offers 500 RVs for sale, 185 of them inside the dealership’s indoor showroom.

It’s all about promoting the RV lifestyle at See Grins RV, a full-service motorized and towables dealership whose location in Gilroy, Calif., is about 30 miles south of San Jose.

Because the facility is a former Walmart store, See Grins has a 128,000-square-foot indoor showroom, which offers a year-round climate-controlled shopping experience and plenty of room for 185 RVs to display in typical campground settings.

“The most important thing we’ve done was create an environment where it’s like a Disneyland for RVers,” Jules Wilson, See Grins RV’s marketing director, told RVBUSINESS.com. “We’ve created lifestyle areas where you walk in and you can see say a toy hauler and get the feel of why people would buy toy haulers. Now you don’t have to have toys; some people just like them because they can be up on the deck looking over the lake or the beach.”

Another 315 RVs are on display on the dealership’s 14 acres of land for a total of 500-plus RVs for sale – everything from diesel pushers to the tiniest of travel trailers – from dozens of manufacturers. 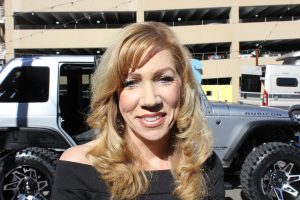 But rather than focus on selling those 500-plus RVs, Wilson pointed out, See Grins emphasizes the RV lifestyle and the healthy benefits it provides.

“There’s so many benefits to RVing – there’s actually factual data that couples who RV actually have a lower divorce rate,” she noted. “We do not push products. We don’t try to sell the RVs. We just want to sell the experience.

“You know, as a mom and RVer myself, I like the fact that we can eat healthier on the road,” Wilson continued. “I can buy the organic foods that I want. We don’t have to go to restaurants that often. And the other thing – especially being in Silicon Valley, or anywhere in this state – is everything’s so high-tech. I like the fact that we can take off, and do what I call, disconnect so we can reconnect.”

Owned for the last year and a half by a partnership group based out of the Los Angeles area that prefers its anonymity, See Grins employs more than 110 people and features 24 service bays and “one of the largest parts and accessories stores in California.”

Jim Hammill, president of Erwin Hymer Group North America, is interviewed for the “RV with Me” television program by Jules Wilson.

See Grins also produces an RV lifestyle show called “RV with Me” that airs all through the greater San Francisco Bay area. Wilson serves as the host and producer of that show, which is carried by four television stations as well as its own YouTube channel.

“We’re on TV 56 times a week and we reach about 2 million households – an approximate reach of 10 million people all throughout San Francisco Bay area,” Wilson noted.

“RV with Me” also focuses on the RV lifestyle, Wilson said, and episodes are shown on televisions throughout the massive showroom, along with customer testimonials.

“See Grins RV really is on a mission to promote wellness,” she explained. “So when you get out in your RV and you connect with your family or your loved ones, your significant other, even just friends, you’re feeding your mind, body and soul.”