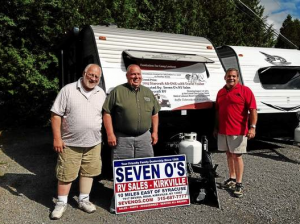 A Kirkville, N.Y., RV dealership and the organizer of a classic car show are working together to raise money for the Madison County Children’s Camp – Camp Lookout, the Oneida Daily Dispatch reported.

Seven O’s RV sales in Kirkville and Starcraft RV have donated a 2015 Starcraft travel trailer that sleeps three to be raffled off. The trailer is worth roughly $14,000, according to Harold Oot, one of the owners of Seven O’s.

The drawing will be held Saturday, Aug. 1 at the Lizard Charity Car Show at the Lebanon Reservoir Campground.

The Madison County Children’s Camp was founded near Cazenovia in 1922 by the county Tuberculosis Association. Throughout the years, it continued as a health camp for children. The camp hosts about 700 campers every summer, said executive director Leo Matzke.