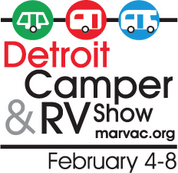 According to the Michigan Association of Recreation Vehicles and Campgrounds (MARVAC), which sponsored the Feb. 4-8 show held at the Suburban Collection Showplace in Novi, Mich., attendance was 7% above last year and is the second largest attendance for the Detroit Camper and RV Show since 1999, which was a nine-day show.

“It was a great show. Saturday was one of those crazy show days where we had a record 10,000 people coming through the doors that day,” said MARVAC Director Bill Sheffer. “The show was also a big success for MARVAC members. We displayed over 280 new recreation vehicles, plus booths with campground information and the latest in RV accessories and supplies.”

Dealers were enthusiastic about the number of show visitors and even more excited about the RV purchases that happened during the show.

Jeff Shumway, sales manager of Lloyd Bridges Traveland, a longtime towable and motorized dealership in Chelsea, said it was a “phenomenal” show and their sales “were through the roof.” Even Wednesday and Thursday, which are typically the slowest of the five-day show, had people looking to buy, he said.

“We brought 20 units and the goal is always a turn of two. We had 20 units sold by the time we got to Saturday, and we ended up with 56 deposits. On Tuesday we already had 10 more units sold from the show. I fully expect to do 70 sales,” Shumway explained. “We did a five-time turn on our travel trailers. It was incredible. It was our best show since 2002-2003, and we’re very, very excited for the year.”

Shumway noted that, for the most part, buyers were veteran RVers who bought a variety of travel trailers as well as gas-powered Sunseeker Class C motorhomes by Forest River Inc. and Sprinter-based Class B models from Pleasure-Way Industries Inc.. He pointed out that most motorhome buyers were moving up from a towable.

“It was kind of strange this year because we had a lot of customers who had units that were 10 years old or older,” Shumway added. “I don’t now whether it was that gas prices were down or the economy is coming back, but they were looking at trading them in for new ones. A lot of customers said the kids were in college so they didn’t need the bunks anymore and they were looking to get something just for them. We took them in on trade or we suggested selling it themselves because those older units do very well on Craigslist.”

“It was one of the best shows we have ever had,” reported Larry Andree, owner of A&S RV Center, a member of the Route 66 RV Network with locations in Auburn Hills and Midland. Andree attributed their success — A&S sold 41 units at the show, ranging from larger motorhomes to entry-level campers — to the combination of an improved economy, low gas prices and banks lending again. “We were selling all sizes to all types of people,” he said. “It was a strong show.”

Another Route 66 RV Network dealership, M&M Camping Center in Trenton, also reported strong sales at the show. Sales Consultant Justin Cooper said overall they were “pretty excited” about the five-day event. “People who were buying were buying a little bit of everything. There didn’t seem to be one thing more than another,” he said.

“It was an excellent show,” said Leon Rogers of Yogi Bear’s Jellystone Campground in Fremont, Ind.  “We go to many shows — six a year — and this one is the best.”

The decent weather was helpful, but according to Rogers it was more than that.  “MARVAC does a nice job putting on this show — not only for the attendees, but for the exhibitors,” Rogers said.

“The people were very engaging and there was widespread interest. In particular for us was interest in our new cottage section,” said Becker, who is the vice president of the MARVAC board. “We immediately saw reservations coming in from all over the state.”