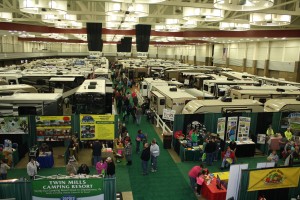 Despite a winter storm that all but wiped out the last day, the 55th Annual Fort Wayne Wonderland RV & Camping Show reported a 19% increase in attendance over last year and was deemed a success by organizers.

Matt Rose, director of recreation vehicles for IMHA-RVIC and the show’s manager, said it was “fantastic.”

“This was our third show of the month. The Indy RV Expo in Indianapolis was up 31% and the Valley RV & Camping Show in South Bend was relatively flat, even though it was up against some other shows. So we were expecting a strong show in Fort Wayne and it didn’t disappoint,” Rose said. “It was so good that even if not a single person came to the show on Sunday, we still would have been up 1,000 people over last year.”

Having a solid first three days turned out to be fortunate since a blizzard hammered the Midwest on the final day. Sunday attendance was just 298 people, but Friday was a record day, and both Thursday and Saturday were the second-best ever for those days. Rose noted that Saturday was just five people short of setting a new high.

“If I had known that I would have pulled some money out of my back pocket, found a family of five and paid for them to come to the show,” Rose joked.

With a blizzard raging outside on the final day, the show was able to commit to a “soft close” and conclude an hour early at 4 p.m. – right after the final two attendees completed their RV purchase and left. The storm also meant a one-day delay for dealers to return units back to their stores.

Randy Riley, sales manager for Barton Lake RV, a towable and park model RV dealer in Fremont, Ind., said they had an “awesome” show, selling 29 total units including three on the final day. Of the 29 sold, 15 were Bullet travel trailers, six were Cougar fifth-wheels and five were Hideout travel trailers, all manufactured by Keystone RV Co. of Goshen, Ind.

They sold an additional five units the first two days of this week, he added, and they expect more residual sales from the show in the days ahead. In fact, on Tuesday morning, Riley said he trudged through knee-deep snow to open the dealership and was followed by a couple wanting to close on a new RV they had seen at the show.

“We couldn’t ask for anything better and our owner, Dave Barry, did an awesome job of making deals for everybody,” Riley said, pointing out that the thousands of attendees were all “quality” RV shoppers.

“We didn’t have tire kickers,” he said, adding the “very positive show” was a good sign for the RV industry.

“I think the manufacturers have done a good job of reorganizing and regrouping their lines to accommodate today’s consumers with smaller tow vehicles who need a lighter weight RV,” he said. “We wrote a lot of deals on lightweights this weekend.”

Of the 32 units they brought to the show, he said there was a lot of interest in the high-end RVs, selling several 29-foot, rear kitchen Jay Flight travel trailers by Middlebury, Ind.-based Jayco Inc.

“Everybody likes all the bells and whistles on them now, like power awnings, radios with the Bluetooth and LCD TVs,” Sleeper said.