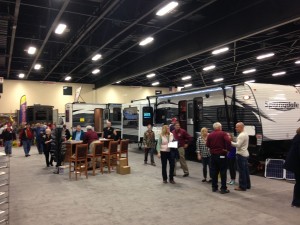 Traffic was steady at the Toledo RV Show

The 50th Annual Toledo Camp & Travel Family RV Show was packed with people throughout its three-day stay at the Seagate Convention Center in downtown Toledo.

Sponsored by the Northwest Ohio RV Dealers Association, the Jan. 23-25 show featured more than 30 exhibitors including RV dealers displaying more than 100 units along with suppliers and campgrounds from Ohio and neighboring states.

Dave Brown, the show’s coordinator, said he typically doesn’t disclose attendance figures, but he did confirm that the event was the best since 2011 and “one of the best ever.”

“They were very, very good numbers – we were very pleased with the attendance. But, more importantly, we had a lot of RV shoppers there,” Brown told RVBUSINESS.com. “Saturday was by far the most well attended, as it usually is, but Friday and Sunday also were good. We did have a threat of bad weather for Sunday, so maybe more people decided to come out on Saturday because of it.”

Todd Lacy, general manager of All American Coach Co. in Toledo, which is celebrating its 40th year as a member of the Recreation Vehicle Dealers Association (RVDA), was very pleased with the show.

“We sold 29 units and we brought 18 – that’s all I care about,” he said, adding that because the show requires paid admission, it tends to attract only serious RVers and buyers.

Lacy, whose family-owned dealership offers a full line of towable and motorized units, said people weren’t buying any specific segment more so than others, although perhaps bunkhouses might have been the most popular. He added that giving away an iPad with each show purchase probably offered some incentive for buyers.

Jack Chalfin, sales manager at Coleman Sales & Service, a towables dealer in Toledo, said they were “very pleased with the attendance and the sales” at the show.

“We sold some of those and a lot of the lightweight stuff was selling,” Chalfin said Tuesday (Jan. 27) afternoon, adding he and the rest of the sales staff have been very busy since the show with customers coming to the store looking to finalize deals.

Adam Kasamis, regional sales manager for Massillon, Ohio-based Little Guy Worldwide, said “overall it was a good show for us.”

“Traffic on Saturday had a ‘buying’ crowd feel to it rather than the ‘looking/dreaming’ feel,” he said. “That’s a great sign this early in the season and similar to what we have seen during other shows so far this year.”

The [email protected] and two [email protected] models on display typically had a steady crowd of onlookers, and Kasamis said most comments he heard centered on the units being “something different” and “outside of the RV box.”

“When customers were passing by, the words ‘functional’ and ‘impressive’ were a couple that stuck out,” he said, adding that other attendees said they appreciated the units’ towability with smaller vehicles and “bang for your buck” features.