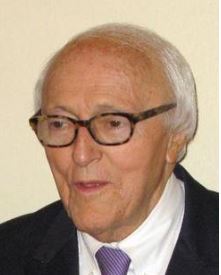 The Council on Aging of Elkhart County awarded the Benny Russo Community Award to Skyline Corp. founder Art Decio and NIBCO Chairman of the Board Rex Martin. The Elkhart Truth reported that the presentation waas held on Tuesday (July 9) at the Lex 530 in Elkhart.

“Everybody seems to know Art. He seems to be a legend in our county,” said Council on Aging of Elkhart County President David Toney.

Decio, when he was in his 20s, joined his family’s struggling business and took it from the garage to becoming one of the three largest manufactured home builders in the United States, according to the Council on Aging.

At age 35, Decio was featured in a TIME magazine article entitled ‘Millionaires: How do they do it,” proving that even in the 1960s his results with Skyline deserved national recognition.

He has worked locally and nationally, serving on boards of educational, religious and civic organizations, including the Federal Reserve Bank of Chicago. He has been chairman of Holy Cross College and fulfilled several presidential appointments to national commissions.

Martin joined NIBCO in 1975, and became president and CEO in 1992 and chairman of the board in 1995. He is also the co-founder and chairman of The Rex & Alice A. Martin Foundation, which makes donations to fund major projects for children by all NIBCO locations, according to NIBCO.

In 2004, Martin received the highest honor given by the state of Indiana, when he was presented with the Sagamore of the Wabash.