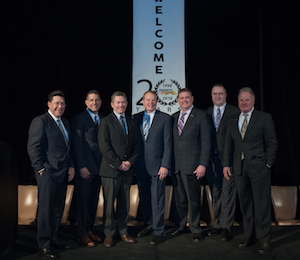 Priority RV Network’s Annual Meeting marked its 20th year as an independent RV dealer collective last week (April 3-5) at the M Resort, Spa & Casino in Las Vegas with nearly 300 dealer and supplier personnel in attendance. The organization has more than doubled in size over the past six years and currently represents 80 dealer-members operating a total of 119 U.S. locations. (To view the a slideshow scroll to the right side of the RVBUSINESS.com home page).

The agenda included closed-door member sessions as well as vendor meetings and a keynote presentation by Daniel “Rudy” Ruettiger whose aspirations to play football for the University of Notre Dame back in the mid-1970’s far exceeded his physical abilities – all of which was portrayed in a high-profile 1993 movie called “Rudy.”

“A lot of it probably has to do with the fact that the industry is up,” said Priority President Mike Regan, president of Crestview RV Center in Buda and Georgetown, Texas. “Right now, we are all riding a high with the industry in general. So, the dealers, vendors and suppliers are excited about what’s going on in the industry right now.”

“It’s probably the most cohesive the co-op’s ever been,” noted Priority Vice President Greg Lala, CEO of Dixie RV SuperStores, whose Hammond, La.-based dealership manages four Gulf South stores. “We had an amazing two days of meetings, great messages from all of our vendors, wonderful participation from all of the members. I would tell you this is probably one of the best meetings we’ve had.”

Added Priority Secretary Brian Wilkins, president of Bath, N.Y.-based Wilkins Recreational Vehicles Inc., with four Upstate New York locations: “Priority currently is posting a record number of locations, record revenues and record gross profits. And the reason for a lot of it, I think, is that Priority’s programs are putting money back in dealers’ pockets. So, it was worthwhile to be there (in Vegas) because the return on dealers’ investment of time is more than it’s ever been before.”