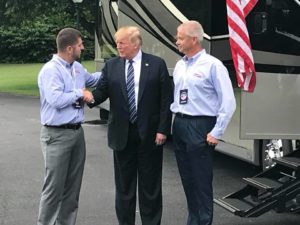 On Monday (July 23) representatives from Newmar Corp. met with President Donald J. Trump along with Vice President Mike Pence, Housing and Urban Development Sec. Ben Carson, and members of the Administration for a “Made in America Product Showcase” staged at the White House. (To view a slideshow scroll to the right side of the RVBUSINESS.com home page.)

As part of the event, President Trump toured Newmar’s 2019 45-foot London Aire diesel motorhome which the Nappanee, Ind.-based company exhibited among the array of products from U.S. companies representing all 50 states.

Newmar President Matt Miller, who attended the showcase with Vice President of Operations Kevin Bogan, told RVBUSINESS.com, “They gave us about a five-minute notice, and he (Trump) came strolling out of the Oval Office. The unit was parked right in front of the Oval Office on the drive. We were about 50 feet from the Oval Office right by the Rose Garden, and he came walking out and stepped into the unit and visited with us a little bit.”

“I told him that the 900 Newmar employees thank him for the awesome economy and his policies and that the way things were going — it was incredible,” added Miller. “He was asking questions about our business and was very engaged and very interested in how things were going.”

The day concluded with a 20-minute talk by the president at about 4 p.m. inside the White House.

“It was an awesome event. It was just phenomenal,” said Miller. “The staff there at the White House did a phenomenal job of coordinating everything. I don’t know how many people came through our unit – probably a couple hundred. And, of course, at 3 o’clock the president came through and asked us questions about who our customers are, how many employees we have and so forth. And there were just four of us in the unit for a couple of minutes — myself and Kevin Bogan, the president and one staff camera person. He is the most gracious, cordial person you will ever meet. He was just wonderful, and we had an awesome time.”

Did Miller succeed in selling the new London Aire to the President?

“No, I didn’t sell him one. I may not have been expensive enough for him,” Miller said. “He asked how much this one was. I said $650,000. We probably should have brought the King Aire. He might have gone for that.”