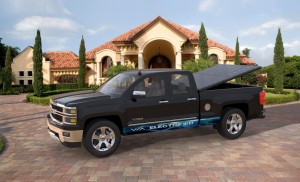 Solar-powered XTRUX by Via Motors

The world’s first full-size pickup truck powered by solar panels is here, according to a report by International Business Times.

It’s called the “XTRUX,” or X-Truck extended-range electric pickup, built by VIA Motors and displayed at the North American International Auto Show taking place this week in Detroit. The truck is essentially an electric Escalade Class-S SUV that comes in two models, averages about 100 miles per gallon, has four-wheel drive and can drive approximately the first 40 miles in all-electric mode. The XTRUX has 800 horsepower, in two 402-horsepower electric motors, and a 5.3-liter Chevrolet V-8 engine.

“And yet, it has the fuel economy that makes a Prius look like a gas guzzler,” Bob Lutz, former General Motors vice chairman and VIA Motors board member, said last week in an announcement at the Tuesday (Jan. 14) premiere of the truck at the auto show.

VIA Motors’ business plan is to take big General Motors vehicles like the Chevy Silverado and “electrify” them by turning them into plug-in hybrid utility vehicles. VIA’s current line of vehicles includes trucks, vans and SUVs. Production for the XTRUX hasn’t been confirmed.

VIA’s solar covers give its line of trucks extended mileage with “plug-free”charging. The truck uses industrial-grade solar panels that can take some abuse and cover the entire truck bed to increase the vehicle’s efficiency. The panels have the same type of photovoltaic cells as solar panels on buildings.