Sometimes reinventing oneself is what semi-retirement is all about. Take, for example, the case of Steve Plemmons. The 63-year-old, second generation owner of Bill Plemmons RV World passed the baton of management to a third generation and is now working with Australian-based Dynamic Suspensions.

A fixture in the Winston-Salem and Raleigh, N.C., RV market since 1951, Bill Plemmons RV continues to dominate the area’s RV sales while again garnering recognition this past year as an RV Business Top 50 Dealer Award winner.

“I guess I’m semi-retired,” Plemmons told RVBUSINESS.com. “I pulled back in May of 2016. My son and daughter (Sterling and Shawna) both stepped up to become VPs and they are running the office now. I go in about once a week and do the manager meeting. About 90% is turned over to them to operate. I thought it was easier to turn it over to them now, when they could still ask for help, rather than just die and leave it all on them.”

Plemmons did take a year’s sabbatical. “I’ve been sending people all over the U.S. for so long camping, I thought it was my turn,” he added. “In a year’s period of time I traveled over 8,000 miles in a 45-foot Entegra bus. I went full-time and lived in the bus. It was very enjoyable. I just loved it.”

The only thing he missed was his “motorcycle and exercise equipment,” said Plemmons, who now keeps his bus nearby for quick escapes. . The Australian company came to the SEMA show looking for business in America. Through a chain of events, the product presented itself to Steve and he became the North American agent for the Australian firm “Dynamic Suspensions” distributing its new Stability Plus “Stabilizer” system to the truck market and for towable RVs.

Back in the business world, Plemmons was at last fall’s SEMA Show in Las Vegas when he put together a deal with a business agent from Greensboro, N.C., to become the North American representative for Dynamic Suspensions, distributing its new Stability Plus Stabilizer system for pickup trucks. 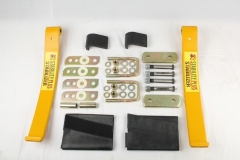 “The Australian company had come over to visit this guy,” he explained. “But when they put together a sizeable order for the distribution, there was a miscommunication – someone dropped an extra zero on the order they were not expecting. And they came to talk to me about the problem,” recalled Plemmons. “We tested the Stability Plus Stabilizer out on several of my trucks and ended up putting together a deal. Now I’m the North American agent.”

Plemmons believed so much in the product, which started in Australia about 10 years ago under another name and company is now available worldwide as “Dynamic Suspensions,” he went for major distribution right away. “In January of 2017, we put the product with Keystone Automotive of NTP-STAG,” he said. “At that time, they had exclusivity for a year.”

The suspension system, “The Stabilizer,” he explained, is designed to take the place of sway bars and stabilization systems when towing. The new system prevents the trailer from swaying by controlling the rear of the truck, taking out the slack in stock suspension. This leaves the front wheels unencumbered from the effects of the trailer, fifth-wheel or truck camper load. Instead of working with the hitch system or trailer frame, the Stability Plus Stabilizer is attached to the rear leaf springs of the tow vehicle.

“The stabilizer half-spring goes behind the rear end, on top of the leaf spring,” said Plemmons. “This gives you total control of the rear of the vehicle without affecting the front end. So no matter how much weight you put in the back, it never lifts up the front. There is no loss of traction or sway up front or rear. When you control the rear end, you control the sway of the trailer.”

Plemmons said a secondary benefit is that the parabolic design of the spring system (thick to thin steel across the length of the spring) makes it stable for towing or loading variable amounts of weight — from zero to 10,000 pounds.

“Once it’s installed on the vehicle, it’s immediately working because it’s preloaded,” he said. “When you put the truck back on the ground, you pull on the thin part of the spring so you maintain a smooth ride. It’s not stiff and bumpy when you are empty. But it does give you better control by reducing body roll.”

With an increase in the load, the system automatically compensates to transfer weight to the thicker part of the spring.

Now that a year has come and gone, he has started handling a variety of truck brands and distributors and is still thrilled with the product. ”We’ve now tried it on every model we could think of,” Plemmons told RVBUSINESS.com. “It will fit anything, but we started off just importing for Ford, Chevy and Dodge trucks to keep it simple. We have used it on anything from a half-ton to a two-ton truck — all with great success. Never had any complaints and no one has ever wanted to take them back off.”

A third benefit of the system, he added, is the smooth operating design.

“The shackles and bolts that go on to hold the spring in place can be greased with zerk fittings,” he said. “So, you can lube them for a smooth operation; there’s never any grab or bind like other springs from the past that jerked or popped. This has rollers on it so it is like roller bearings that operate smoothly.”

Plemmons, meanwhile, says he’s made an impact with the company. “When I came on board the company had gone through a change of ownership that allowed us to make some changes on the spring,” he said. “I was part of creating the three-hole adjustment on the shackle for soft, medium and hard loads. They used to have just two adjustments. And then the color yellow instead of the blue — now they have gone yellow worldwide with that design.”

The retail price for the Stability Plus Stabilizer system is about $450. “It only takes a half hour to put them on,” he said. “So, installation is shorter, which is good for shops especially now that business has picked up. I am really enjoying this because it’s a different product and it makes things easier for people.”

To view a video or for more information www.dynamicsuspensions.us.