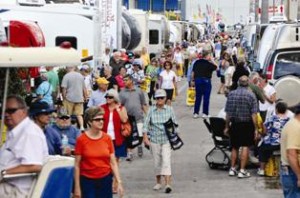 Large crowds and robust sales at consumer RV shows in the first month of 2013 give the industry positive news for the start of a new year.

Building on a third straight year of shipments growth, the industry is poised for continued recovery in 2013, the Recreation Vehicle Industry Association (RVIA) reported.

Across the country, RV shows are reporting high levels of attendance and strong business. This was the case at the Original Pittsburgh RV Show, organized by Rob Young.

“Our attendance was up 15% this year, and sales were up about 10% — and last year was a good year for dealers too,” Young said. “This has been a record year for us both in attendance and amount of space sold.”

This experience was shared by Joe Gonsalves, who runs the Northeast RV and Camping Show in Hartford, Conn. Gonsalves said he increased the size of his show by 10% this year, to account for increased demand from dealers and vendors.

“Attendance is up 13% this year,” said Gonsalves. “And dealers are reporting more sales than in the past few years.”

The RV show in Syracuse, N.Y., reported strong attendance and sales, as well. “Just from the start of this year — and the last quarter of 2012 — business has been booming for us,” said Kevin Bostrom of Camping World, which runs the Syracuse show. “Shipments and sales are way up.”

In Tennessee, the Knoxville RV Super Show drew more than 15,000 visitors.“This year’s show is much bigger due to last year’s success,” said show manager Rob Lynch. “We’ve got 30% more RVs and 15-20 more vendors. We’ve got everything from pop-up campers to half-million-dollar motorhomes.”

The Florida RV SuperShow in Tampa saw attendance rise slightly from 2012 to 54,255 — a new record for the show. “We didn’t knock the doors off, but it was better than last year,” said Florida RV Trade Association (FRVTA) President Lance Wilson. “We were very pleased. No. 1, we want to make sure enough people are there, and No. 1B is we want manufacturers to sell products. In most cases, people did very well.”

“The attendance for this show was phenomenal and it’s obvious the camping and outdoor lifestyle is growing,” said Dave Rochette, owner of Westland Camping Center, in Westland, Mich. “Interests are across the board, ranging from the small, less-expensive models, to the larger, luxury models.”

Coverage has been positive with a focus on large crowds, strong sales and innovative products at an array of price points.