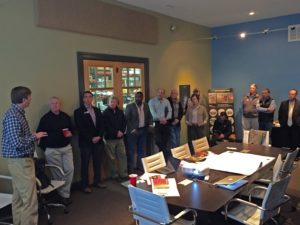 David Knight, far left, talks with a group of outdoor recreation representatives at the headquarters of SylvanSport

Tasked with supporting and promoting the $28 billion outdoor industry in North Carolina, the office will work with economic development, land and resource managers, elected officials and other stakeholders to foster the growth of the outdoor industry in the state, according to a press release.

North Carolina is the fourth state to create this position, with the state legislature and Governor recognizing the benefits of the outdoor industry on the state’s economy. In North Carolina, outdoor recreation is the fourth largest economy behind hospital care, outpatient health care, and financial and insurance services.

“Nobody makes this stuff (outdoor recreation equipment) to use in their backyard,” said Dempsey. “They make RVs to use on public lands. The outdoor industry depends on taxpayers to support parks and recreational areas and, increasingly, we’re all aware of user fees. Those are the kinds of concepts this office is designed to address and move forward, but it is a unique industry in that we’re all making gear to use on public lands, which makes it necessary to be well integrated with public leadership.”

Dempsey believes North Carolina will be a leader in how state and local governments and the outdoor industry can work together to build strong and thriving economies.