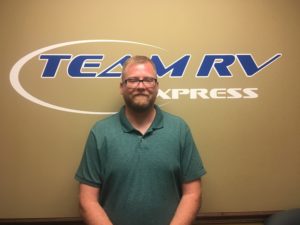 Middlebury, Ind.-based Team RV Express LLC, a major transporter of Canada-bound RVs, announced the hiring of Shawn McGee as territorial manager for the Maritime region in Eastern Canada, including Ontario.

According to a press release, McGee will be based in Nova Scotia. He joins a staff of three including the representative for Western Canada.

“We feel that eastern Canada, and the Maritime region in particular, is our best opportunity for growth in 2019,” says Brian Mellstead, human resources director.

Mellstead said Team RV Express “cut its teeth” 11 years ago in Ontario and Quebec and has evolved to service all of North America but specializing in Canadian deliveries.

McGee, a 30-year-old resident of Halifax, Nova Scotia, has worked in automobile sales for the past four years. He has resided in the Maritimes for the past eight years living in New Brunswick and on Prince Edward’s Island in addition to Nova Scotia. He is originally from Kingston, Ontario, and his family has been in the RV business for more than a decade.

“I love to try new things and this will definitely be new,” McGee said. “It will take me a bit to get used to selling an intangible item but I’m really looking forward to it.”

He also said that he is the only RV transport company representative in Nova Scotia and initially his home province will be his main target. “We deliver to two Nova Scotia dealerships now but there are tons more we could be doing,” he said.

McGee said he will spend a week training in Alberta with Devon Mason, Team RV Expresses Western Canada manager, and then start preparing for the Elkhart RV Open House in September.

“What I’m looking forward most is visiting the dealerships, traveling to the remote areas of Eastern Canada and seeing new things,” McGee said.