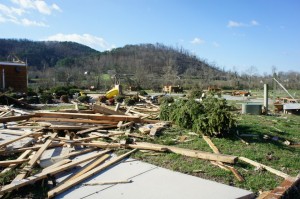 KOA Tellico Plains, Tenn., owner William Stokely is thankful, at least, for the timing of the tornado that struck Monroe County on Friday (March 2).

According to a report in the Knoxville New Sentinel, the storm leveled the empty commercial campground a mere two weeks before it was to open for the season, Stokely said.

“I think God was looking out for some people,” he said.

More than a dozen structures on the 30-acre site, including 10 cabins, two lodges and the main office building, were caught directly in the tornado’s path after it swept through downtown Tellico Plains and crossed the Tellico River.

The National Weather Service has since confirmed the tornado was an EF-2 with winds up to 130 mph. Its path was 400 yards wide and 14.6 miles long. No major injuries have been reported.

Stokely estimated the value of the damaged and destroyed structures, all built within the past 10 years, at more than $1 million. He said he doesn’t know how long it may take to rebuild.