On an industrial side street on the east side of Elkhart, Ind., Texas-based dealer Fun Town RV is currently setting up a rather novel operation — a predelivery inspection (PDI) shop in an 80,000-square-foot former Lippert Industries Inc. facility through which every towable unit it purchases in the future will be subjected to a rigorous inspection before being delivered to the retailer’s 12 stores in Texas and Oklahoma.

That’s a tall order for a company that retailed 9,100 units last year and has aspirations for handling a lot more than that in the future if Fun Town President Jarrod McGhee’s ambitious expansion plans come to pass. 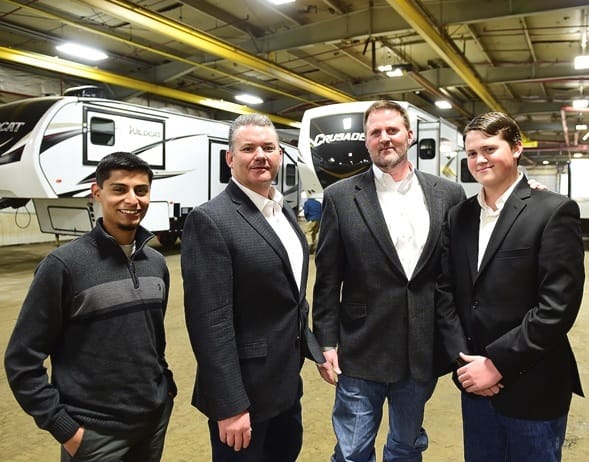 “I decided I’m going to start shipping all my units the minute they come off line to my hub in Indiana,” said McGhee, who’s shifting the bulk of his PDI work from Cleburne, Texas, and was in Elkhart Thursday (Feb. 28) when interviewed by RVBUSINESS.com. “And I’m going to run them through my PDI, 130-point check right there. We’re going to make them camp-ready before they ever leave Indiana. So, now I don’t have two weeks, three weeks of parts going back and forth between us (Fun Town and its manufacturers and suppliers). If there’s a problem, I’m five minutes down the street from where it was built.

“We already have 15 employees up here,” he said. “Kevin Farnham, who used to be one of my reps for years, is the GM, and we are actually setting this building up as we speak. We should be running trailers through here by March 15.”

At Fun Town’s “Excellence Center,” as McGhee calls it, batteries will be connected and gas appliances powered up to make sure everything is up and running. And essential systems are to be rechecked in Texas after customers purchase units through another 30-point “Quality Assurance Check” involving everything from cabinet doors to voltage and a manometer test to make sure there’s no problems with LP gas lines.

An outspoken advocate of improved RV industry quality in general, McGhee is also in the process of setting up an expansive new 77-acre Mega Service Center near Fun Town’s corporate headquarters in Cleburne, southwest of Dallas/Fort Worth, where he will be among the first – if not the first — in the RV sector to offer consumers same-day service, assuming parts are available. The Mega Center contains 100 service bays, a full staff of RVIA-certified service technicians, a customer lounge and “triage” specialists who help diagnose customers’ service issues and expedite things through Fun Town’s express-check-in lanes.

Back in the Midwest, McGhee said Fun Town had already signed up 250 people for a job fair next week with plans to hire 25 more people for the first shift, then, later, perhaps, additional workers for other shifts. It’s all part of McGhee’s rather enlightened view of the recreational vehicle industry’s more flawless future.

“It used to be everybody would argue about the defects when they came off the (manufacturers’ production) line and about whose responsibility it was,” said McGhee. “Now, everybody seems to be pitching in and coming around to the realization that it doesn’t matter whose problem it is and who was wrong. Now everybody’s on the same page. It’s time to get this stuff made right. All the finger-pointing’s done. I think everybody’s now looking at how do we make our industry work for the next 25 years instead of the next 25 weeks.”