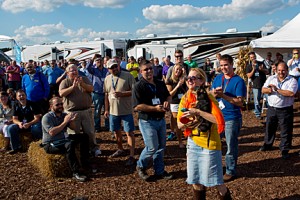 Kim Weir reacts to winning a Corvette in Thor giveaway

When Kim Wier heard Bob Martin, president and CEO of Thor Industries Inc., call out a name in the drawing for a 2014 Chevrolet Corvette Stingray Wednesday afternoon (Sept. 17), she shrugged it off like roughly 2,000 other people who were there and whose names weren’t called.

But when that person didn’t show up to claim the prize in the middle of the Thor display for the 7th Annual Elkhart County RV Open House, after a couple of minutes Martin said, “We were clear: You have to be here to win.”

When the second name was drawn, it still wasn’t her.

Nor was the third.

But for Wier of Genuine RV Store, a Keystone dealer in Nacodoches, Texas, the fourth time was the charm. “That’s me!” she responded when Martin read her ticket number.

While she was thrilled by the gift, her first move was unusual: She gave it away. “This’ll be my husband’s. He’s the one who worked so hard for this since day one.”

After all, it had been a longtime desire of her husband, Tony, to have a Corvette, but it’s something he’d never splurge on. “I could afford it, but I’d rather give the money to charity,” Tony Wier told RVBUSINESS.com. “This is a nice compromise from God.”

It was a nice way to cap his seventh trip to Elkhart for open house, “We’ve been here since Forest River’s first open house, and I’ve been coming to this one since it started and buying lots of units,” he said. “It’s a lot of fun.”

Martin noted that Thor offered to ship the Corvette to Texas, but “they insisted on driving it home.”

Though the drawing wasn’t exactly smooth, it certainly had dramatic tension — and drew a crowd of dealers. So in all, Martin said he was pleased with the addition to Thor’s open house events. A Harley Davidson motorcycle was also given away, and as Martin said to the crowd, “The giveaways are just part of us creating a fun atmosphere to give back to you, our dealer partners.”