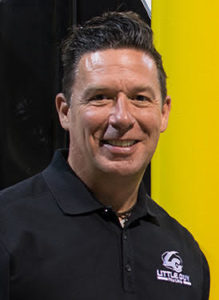 Liberty Outdoors, the Somerset, Pa.-based towables manufacturer that traces its roots to Little Guy Worldwide, is enjoying a “wave of momentum” as it’s found a sweet spot in the compact travel trailer segment, officials said. (To view a video scroll to the right side of the RVBUSINESS.com home page).

Highlighted by the launch last year of the Little Guy Max and the more recent introduction of the Mini Max – both teardrop-style single-axle campers – Liberty Outdoors has experienced a string of sales and welcome reception by a diehard segment of the outdoor adventure-loving community, said Chris Baum of Liberty Outdoors.

Baum, while driving through the hills of Pennsylvania, recently answered a few questions from RVBUSINESS.com.

RVB: So you’re saying this recent momentum has been led by two units?

Baum: Absolutely! We’ve got the Little Guy Max, which has been out since basically September of last year. It’s won a bunch of industry awards, and the response has been amazing. It’s obviously the biggest thing that we’ve ever sold or been a part of, and it’s just really nice to be able to control the manufacturing process. It leads to the sales process and everything else, so it enables us to really put a plan in place.

Then when we were trying to decide what to do next, we came out with the Mini Max. We first showed it at Elkhart Open House last year. At the time it was named the Plus, but we renamed it because it really is like a Mini Max. It really fills a hole in the marketplace, where a 6-foot person can stand up inside of it. Plus, you’ve got a huge fridge, big windows, and it’s under 2,000 pounds.

The dealer body has been very receptive to it and – honestly – they’ve kind of been waiting for it, because it meets the needs that the other trailers in this segment don’t, and at a great price point. Then when you put what we do from a sales and marketing standpoint behind it, it’s … you know, last year was so difficult and now it’s like man, we’ve seen the light at the end of the tunnel and we’re just plowing through it now.

RVB: You’ve really embraced the concept of using “brand ambassadors” – RVers who use your product and openly market the lifestyle to others. How much of this can also be attributed to the momentum?

Baum: We’re getting really creative from a marketing standpoint. We’ve got brand ambassadors out on the road like Janine Pettit and her whole “girl camper circus” out there. She’s doing an event in Texas this weekend with the Sisters on the Fly group; there’s hundreds of them all gathering together. So yeah, she’s going to be taking our different products out on the road, which has been great, and she’s been super to deal with.

RVB: And I believe you interviewed the two women who purchased the very first Mini Max?

Baum: That’s right. That was the absolute first Mini Max. We did a Little Guy Open House to debut the product at Tom’s Camperland in Mesa, Ariz., and I shot a quick video with them, just getting their perspective on it, and I think they nailed it. I didn’t tell them what to say or anything like that, and I think they nailed it. Then they called a couple girlfriends of theirs. They bought one the next day, and then it just started snowballing.

We ended up selling 12 units in three days over two weekends. Most of them were Minis, but there were a couple of Maxes involved also. Yeah, so that was a pretty great way to debut the product. Tom’s Camperland is the biggest dealer we have in the country, and that’s where we wanted to kick it off.

RVB: Tell us more about the “Little Guy Open House.”

Baum: That’s one thing that we are really going to focus on, is doing these Little Guy Open House weekends at different dealerships around the country; either I will go out there or Anthony (Chiera, sales director) on a Friday and Saturday. We really market it heavy ahead of time, and right around when all these dealers are going to be getting new products. So as Mini Maxes start showing up, we get together and we have an open house on a Friday and Saturday. I bet we had 60 or 70 people come to Tom’s Camperland just off the ads we placed and the email leads. Those are such strong leads that it makes it easy for the dealer.

RVB: So what’s next for Liberty Outdoors?

Baum: Now with things going so well over in Somerset at the plant, we’ve got a couple of other products in development right now. We’re looking to debut another one this summer and then another one in the fall at Open House.

RVB: I can’t let you go without trying to get more details on these new products from you. Can you spill any beans?

Baum: I would say what we’re looking to focus on is that under 2,000-pound market, that niche market we’ve built up.

I think you’ve seen some competitive product out there in that range – and maybe I’m biased – but I also don’t think that they’ve got the trust of the dealer as much as we do and being able to drive that marketplace. And now that we control the production and the manufacturing, we can really meet the niche that the people are asking for.