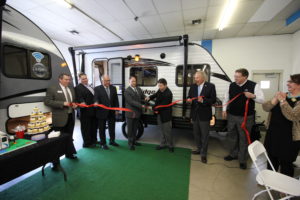 About 100 friends, family and local dignitaries gathered Thursday (April 5) for a ribbon-cutting ceremony at Reineke RV in Toledo, Ohio. A similar event will be held April 9 for the company’s new RV dealership in Tiffin, Ohio.

Reineke RV is the new venture for the Reineke Family Dealerships, which owns nine automotive dealerships in northwest Ohio.

The Tiffin location, which carries the Starcraft and Flagstaff brands and was formerly Fort Ball RV, was acquired in February.

At about the same time the Toledo store, which carries Starcraft lines, joined the Reineke family through a partnership with the Chalfin family who owned the former Coleman Sales & Service since founding it in 1960. The two families share a long history as neighbors and friends, and members of the Chalfin family have stayed on in management roles.

Combined, the locations have about a dozen employees and offer new and used sales, service and repair, along with parts and accessories with about 80 folding campers, travel trailers and fifth-wheels on the lots. The Tiffin location also offers automotive detailing and window tinting. 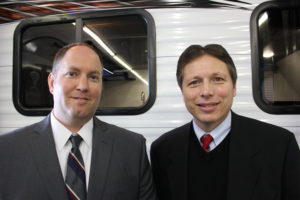 Dan Reineke, co-owner of the Reineke Family Dealerships with his siblings, and Jamie Chalfin, general manager of Reineke RV’s two locations, spoke with RVBUSINESS.com just prior to the ribbon-cutting ceremony.

RVB: Dan, tell us about your family’s automotive dealerships in northwest Ohio.

RVB: And what attracted you to becoming an RV dealer?

Reineke: It started off a little over a year ago when I was first inquiring about Fort Ball RV, and speaking with Dave Lather down there. Basically, I found out that RVs are governed much in the same way it’s done in the auto industry. So – understanding that there were not a lot of new things we had to learn because everything was very similar – we reached out to the Chalfins and decided to come together as a group and make this work.

It helped that the RV industry is doing well, but it also was a situation where we had the opportunity to get into it and it just seemed to make sense.

RVB: How do the two families know each other?

Reineke: We’re all from Fostoria (Ohio), and Jamie’s dad, Tom, was our neighbor. He and my brothers were friends throughout grade school and high school. Plus Jamie’s grandfather and my parents were good friends. There’s a lot of history.

Chalfin: The philosophies are very similar between the families and that’s what really made this come together so well.

RVB: Jamie, it was your grandfather, Merrill Brand, who started Coleman Sales & Service?

Chalfin: Yes, he started it with a partner in 1960. Then my dad married into the business and then I started coming in probably when I was 2 years old, just doing odd and ends, running around here. I’ve been here ever since; couldn’t get away. 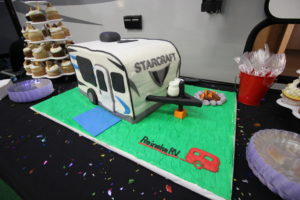 RVB: As the general manager overseeing both locations, what are your goals and expectations?

Chalfin: We’ve always been focused on customer service. We treat all our customers like they’re family. We know most of their names, and the Reinekes do that as well with the car dealer side, so we felt like that was a good connection between us. We’re both on the same playing field as far as customer care and the way we take care of our people.

Reineke: We are looking forward to Jamie’s expertise to carry the stores forward.

Chalfin: Absolutely. With the automotive side of it we can help with trucks and two vehicles. We can actually line up the trailer with the vehicle that’s going to pull it very well. It’s really a complete package. And if they already have the truck, we can help them identify what they really need in an RV and then what they can pull.

Reineke: ‘Get your key from Reineke’ – that’s the tagline.

Chalfin: And ‘Get your RV from Reineke’ – that’s ours.