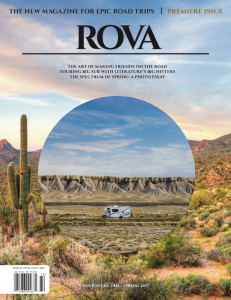 “Rova,” a consumer magazine covering the RV lifestyle, recently wrapped a successful first year of publication marked by a warm reception from its target audience that is mainly the next generation of RVers, said Editor-in-Chief Gemma Peckham.

The highly stylized magazine has grown from an initial circulation of 30,000 issues to about 50,000, Peckham reported, and will expand from four issues per year to six editions in 2018. Staff has grown as well, and there’s discussion the Australian-based parent company might open a second office on the West Coast to supplement the North American headquarters in New York City.

“I think we’ve really exceeded all expectations that we had when we came into this,” Peckham told RVBUSINESS.com. “It’s been quite amazing actually for me to just see the reception that we’ve gotten. It’s such a different type of RV magazine that it’s getting a lot of attention and a lot of people are surprised when they find it and say, ‘Oh my goodness, where has this been? This is really speaking to me and a lot of people that I know that do this kind of travel.’”

“Rova” – a combination of “road vacations” and “recreational vehicles” – also recently was named one of the “20 Hottest Magazine Launches of 2016-17” by the Association of Magazine Media in conjunction with Samir “Mr. Magazine” Husni, the founder and director of the Magazine Innovation Center at the University of Mississippi’s Meek School of Journalism and New Media.

“Sometimes it seems a bit surreal, like it’s a bit of a dream,” Peckham said. “I was interviewed very early on by ‘Mr. Magazine’ who said, ‘you’re starting a magazine about RVing for Millennials in a cultural climate where people say magazine publishing is dying. Are you crazy?’ I said, ‘Yes, I guess maybe I am slightly crazy.’ I guess this is an indication that maybe my craziness is paying off.”

Peckham recently took some time to answer a few questions from RVBUSINESS.com.

RVB: How about telling us some of the first-year highlights?

Peckham: Oh gosh, I don’t even know where to start. I think one of the major highlights for us was actually realizing that people were interested in what we’re doing, particularly in terms of advertisers and getting some big name brands on board with us. That was at the outset, before we had even actually released one edition of the publication. That was a major highlight for us in getting advertisers like Thor and others on board at the start.

We’re getting more and more feedback from people just telling us how much they love the magazine. My favorite part of the whole thing is just hearing from people who travel or who dream to travel and they’re out on the road or they want to be out on the road. They’re telling us that the content that we have really speaks to them and that they connect with it. That’s the whole idea behind the publication and that’s what makes me really excited about where it’s headed.

On top of that, we’re getting some fantastic submissions from writers and photographers all around the country who want to be a part of the magazine, and all of those people are making it even better. I think the fourth edition that we’ve produced was the best so far. I just see it going from strength to strength with the quality of the submissions that we’re getting and now that we’ve kind of settled into what it is that we’re doing. I think 2018 is going to be a pretty great year for us.

RVB: And we’re to understand that you’re going from four to six issues per year?

Peckham: Yes, that’s right. We’ll be bimonthly this year. The first edition is February/March and then every two months thereafter. Another great thing for us is that we had people asking, readers in particular, saying one of the things that they would like is more editions per year because they don’t like waiting for three months to read it. That’s a huge compliment for us. Advertisers were quite keen to get on board with that as well. That’s the reason that we’re going in that direction this year.

RVB: And distribution has grown as well?

Peckham: Every edition that we’ve released, we’ve sold more copies and we have more subscribers. We started out at about 30,000 copies, and we’re looking at probably about 45,000 to 50,000 copies now, which is great. Every order that we get from our circulation team is increasing, which is wonderful. It’s steady growth, not huge growth – but we’re happy with that.

The distribution is quite similar to where it was when we started, which is newsstand copies in Barnes and Noble, and various independent newsstand and bookstores across the country. Since we’ve started, we’ve actually picked up Kroger supermarkets and Walmart, Ralph’s, all of those kinds of larger chains, which is also really great for us. Now we’re looking into more independent stores that specialize in outdoor adventure and those sorts of things.

I should mention that for the first time since we’ve started, our Barnes and Noble ranking is coming above some of the other RV magazines, which obviously we’re very pleased about.

RVB: What about some of the feedback you’re getting from your advertisers in the RV industry?

Peckham: One of the biggest compliments, or at least a show of confidence in what we’re doing, is we had a number of advertisers who signed up for the full year and the majority of them have signed on again for 2018. They’re really pleased with the reception that they’re getting from our readers, and with each edition that they’ve received with their ads displayed, they see that we’re consistently producing a really good publication.

We actually put out a survey to find out more from people about what they want to see and then we communicate that to advertisers. That’s been going really well. They like getting more of an idea about how they can connect with our readers.

RVB: Any editorial plans for 2018 that you’d care to pass along?

Peckham: Our focus for the first year, we were really looking at full-time RVing, people who lived on the road and telling a lot of the stories of that side of it. Now for this next edition, we’re going to look at part-time RVing for people who have a full-time job and they go RVing on the weekends – or “weekend warriors” if that’s what you want to call them.

Also, people were really interested in RV renovations. I think this demographic often buys the older RVs and vans and then they revamp them so it has their own style and it’s real unique. So we’re doing a feature on that as well in this first edition of the year and then we’ll do another one in the middle of the year because there’s a lot to say about that area.

We have a few people who asked if we could do a few more of the technical tips and tricks types of articles. The whole idea behind ROVA from the outset was that we were going to be telling the stories rather than getting into the technical side of things. We don’t want to change our game plan too much because we think it’s working really well. But I think probably what we will do is some interviews with people who might have insight into particular areas of RVing. Hopefully, they can relate their more technical tips and tricks into more of a narrative than what maybe some other publications do. So, we’ll try to incorporate some of that, but we don’t want to take away from what we’ve been doing so far.

We’ll be doing more solo road life. We’ll be looking at how people make a living on the road because there are a lot of people out there doing that. Other topics will be maximizing space, and trying to come up with more quirky and unique types of stories that you wouldn’t find anywhere else.

Then, other than that, much of the feedback that we had when we asked people what they would like to see less of, they said, “nothing, we love it.” We don’t really want to make too many changes because we’re getting a really great response.