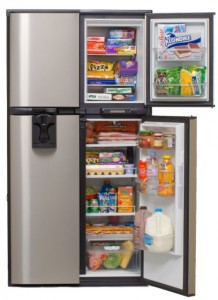 Founded in 1959 to manufacture and sell specialty refrigerators for the RV and marine industries, Thetford Marine’s Norcold brand is proud to celebrate its 50th anniversary. Selling more than 3 million refrigerators/freezers worldwide, Norcold strives to exceed the needs of a demanding marketplace, according to a news release.

As the recreational industry prospered, so did Norcold. Rapidly growing from a small, family company in California to a world leader, Norcold was acquired by the Stolle Corp., an Alcoa company, in 1963. To handle rapid growth, Norcold moved to its current Sidney, Ohio, location in 1964.

When a competitor bought its primary supplier of cooling units in 1988, Norcold responded quickly and dynamically. Within a year, the company built a manufacturing plant in nearby Gettysburg, Ohio, that produced higher quality products than its previous vendor.

Norcold’s growth and innovation continues today, with the introduction of features such as the water-in-door Chilled Water Dispenser. The company recently launched the largest gas-absorption RV refrigerator on the market, the 17-cubic-foot PolarMAX RF (shown above at left).

Headquartered in Ann Arbor, Mich., Thetford Corp. is the world’s leading supplier of sanitation and refrigeration products for the recreational vehicle, marine and heavy-duty truck industries. Thetford is a privately held company with eight manufacturing facilities in four countries.

Thetford subsidiaries include Norcold, America’s leading manufacturer of gas-absorption refrigerators and freezers for the RV, marine and truck markets; Tecma, a producer of fine-china toilets and powerful waste-transfer systems based in Italy; and Spinflo, a unit in England that manufactures high-quality cooking and heating appliances as well as accessories.