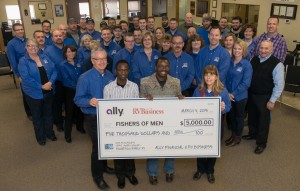 Mwalimu Karisa’s second dream is getting closer to reality. Karisa, 20, who spent a year in the Iowa’s Quad-Cities in 2012 as a foreign exchange student, first dreamed of seeing a drinking well built in his village in Kenya. About 18 months ago, that came to be.

“This well has changed everything,” he said.

Now, the freshman at Wartburg College in Waverly, Iowa, is close to seeing his second dream come true with the construction of a medical facility in the same village of Maryango.

The Quad-City Times reported that Thompson Family RV in Davenport received a $5,000 check Wednesday (March 5) for exceptional charitable outreach from Ally Financial Inc. and RVBusiness, a trade magazine. That money will go toward completion of the medical center.

Bill Thompson, director of recreational finance for Ally Financial, and Sherman Goldenberg, publisher of RVBusiness, presented the $5,000 award. Goldenberg noted that the check went to Fishers of Men, a faith-based organization, as a followup to Thompson Family RV’s being named as the Spirit Award winner for exemplary charitable giving as part of the RVBusiness Top 50 Dealer Awards for 2014.

In addition to helping with the drinking well, Mark Thompson said he and his company will have given at least $70,000 toward the $160,000 medical center when it is completed.