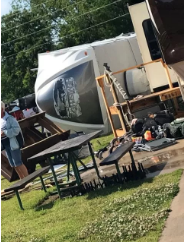 Seven RVs at Anchors Aweigh RV Resort in Baldwin County, Ala., were overturned after reports of a tornado that crossed through the county Sunday (Arpil 22) afternoon.

FOX10 News received dozens of reports of damage, a tornado warning was issued in the county at 3:26 p.m.

As the storm crossed Highway 59, it caused more damage at the Lowe’s in Foley. The manager there said the rear of the building took a hit and the store will be closed until Tuesday. Witnesses told FOX10 News that several vehicles in the parking lot were also damaged.