UP Rolls Out as Independent RV Park Network 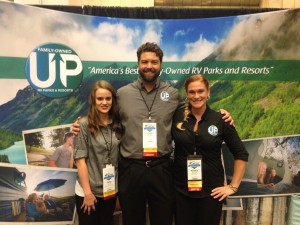 There’s a new network of RV parks and resorts growing in the campground sector. United RV Parks (UP) made their debut to the sector in Las Vegas during the expo portion of the National Association of RV Parks and Campgrounds (ARVC) convention.

When the family owners and staff at Paradise By The Sea RV Resort in Oceanside, Calif., thought about how tight their marketing budget was, they realized there was a chance to team up with other parks, pool resources and promote each other economically.

“We saw a need for family parks. We’re the little guys, we don’t have the advertising dollars that a lot of the big places have, and we thought if we came together we could make a splash together than just us doing it by ourselves. We saw a void and wanted to fill it,” said Amy Soto, office manager for Paradise by the Sea.

Thus, UP was born.

But when there are viable options like Kampgrounds of America Inc. (KOA), Leisure Systems Inc., or Cruise Inn RV Parks available, what sets UP apart?

First off, it’s the fact that nothing has to change at parks that become UP members, said Cole Sampson, whose family owns the park and has for 37 years.

“We’re the new guy, but we’re trying to be the voice for independent parks,” he told Woodall’s Campground Management, sister publication to RVBusiness. “We’re able to market for these independent parks.”

His wife, Kirstie, said, “We don’t have the parks change anything, conform to anything, their name, their logo, their outfits. They keep their parks. We’re just looking for the best ones to promote and put on the map.”

“We have eight parks right now, most in California and one in Arizona — and as of this conference, a lot of interest,” Kirstie Sampson said.

It’s a marketing venue and a networking opportunity for smaller parks, she said.

“We want to expand across the U.S. and really have a great, reputable parks that are top quality. We love their uniqueness and their independence,” Soto said. “We just advocate for you. It’s just coming together to promote each other.”

The organization’s site, www.UnitedRVParks.com, has been around since April, but it wasn’t until October that the Sampson family started to push it publicly at an RV show in Pomona, Calif.

It’s already paid benefits. Kirstie said when their park was booked full over Thanksgiving, they were able to send people to another nearby RV park that was part of UP. They’ve also been able to exchange referrals with an RV park near Disneyland in Anaheim that didn’t know their park existed before joining UP, she said.

The cost is a flat $995 a year, all of which goes into the Website and marketing for member parks. “We already have jobs, so this coincides with it,” Cole Sampson said.

“We’re looking for a well-run place,” not a fixer-upper type of park, Cole Sampson said.

That said, “We’re not trying to fix their park, we’re not a general directory, we’re really not taking their DNA, we’re in their DNA,” he said.

The way the UP founders figure it, corporate-owned chains, campground franchises and real estate investment groups purchasing parks at a feverish pace could soon leave independent owners trailing behind. UP aims to offer the industry a reputable brand to help independent parks thrive — teaming up with top-rated parks that reflect an unmatched pride of ownership to give RVers a brand they can trust.

Family-owned RV parks and resorts benefit from UP’s industry leading map search, booking requests, advertising, brand loyalty, and park-to-park referrals. Every day, member parks have dozens of guests that are looking for a trusted recommendation for their next stop, and they’re able to make an easy referral within the UP brand, according to the Sampsons.

“The RV market is big enough for everybody. There’s niches for franchises and chains who do great jobs. We’re just trying to fill a niche for these independent, family-owned places,” he explained.

“Just running our family’s park, I kept saying, ‘What does our family need?’ In this competitive market, people are branding together, people are joining together — which is a good move for the industry — but what does an independent park need in this market? They need a louder voice, a voice to unite and bring them together, hence United RV Parks. Join up, team up.

In a formal written announcement about UP’s launch, Seth Harper, vice president of marketing for Arizona Oasis RV Park, said, “To be a part of a close family is a very unique and uplifting relationship. We believe it means that you treat people with care and a special loyalty. So when we heard that other family owned resorts were banding together with a similar vision, it only made sense for us to be a part of it.”

As Cole Sampson summed up to WCM, “We’re not outsiders trying to fix it, we’re insiders promoting our peers.”