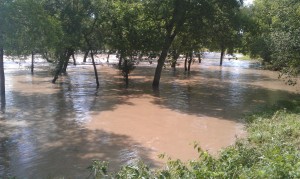 The spring thaw is coming to large swathes of North America, followed up by rains that can produce flooding, even in drought-stricken areas.

They’d been through it before. Situated on Medio Creek in peaceful Von Ormy, Texas, just outside of San Antonio, Hidden Valley RV Park had weathered floods — but nothing like the one that hit the park over the 2013 Memorial Day weekend.

In the wee hours of May 25, park operators Teri and Mark Blaschke were told to expect the creek to rise a modest two inches, certainly not a flood condition.

What happened next was fast, furious, and literally changed the landscape of their park and their business.

“We’d seen two inches before and knew it was not a critical situation. We went about our business,” said Teri Blaschke. However, with the increase in area construction creating new and unpredictable runoff paths, something big was about to happen. By 6 a.m. things had taken a turn for the worse. Water upstream was gaining velocity, tumbling down the creek, and Blaschke shifted into high gear. She implemented her disaster plan, contacting guests and advising them of the situation, strongly suggesting a move to higher ground. Many took her advice, some were too slow, others didn’t give the threat credence, and some campers were not at the park that morning.

By 8 a.m. the once-meek but now-mighty Medio had risen 12 feet, transforming itself from a bubbling meander to a violent torrent. Transfixed, those at the park stood on high ground and watched Mother Nature’s devastating blows with awe.

By the day’s end the water had receded, taking with it trees, utilities – even one RV that has still not been found – and left behind a barren landscape of dirty sludge, debris, and deep pits where trees and utilities were ripped from the ground. Seven RVs were a total loss, including Hidden Valley’s rental trailer.

Although the park was insured, flood insurance was not financially feasible according to Blaschke. After this devastating event, wiping out the majority of their sites and sustaining critical losses, they considered closing up shop. It was a gut-wrenching decision to make.

To find out what factors went into their decision — and an insurance expert’s advice on being ready for disaster — pick up March’s edition of WCM.