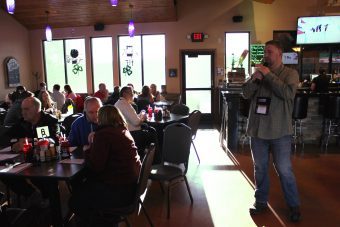 Highlighted by a full day of educational seminars and an evening of exchanging “best ideas,” the Wisconsin Association of Campground Owner’s (WACO) 2018 Convention got underway yesterday (March 14) at the Holiday Inn Hotel & Convention Center in Stevens Point, Wis.

Set to run through Sunday, the event includes another day-and-a-half of seminars, a two-day trade show, and a variety of fundraisers. Deemed the largest campground convention in the nation by WACO, the trade show portion of the convention will feature nearly 200 vendors with hundreds of people from about 70 campgrounds in attendance. Throughout the entire convention WACO will be hosting more than 50 sessions, noted Lori Severson, WACO’s executive director.

One of the Wednesday seminars discussed the preparations campground owners should take in the event of an active shooter, which drew a standing room only crowd to listen to advice from by Portage County Sheriff Mike Lucas.

The number one priority is the safety of their staff and guests, Lucas said, so owners must have a plan in place in case there’s ever an active shooter at their campgrounds. The plan should include evacuation to predetermined rally points. In the event an evacuation is not possible, then staff should be trained in how to barricade themselves inside buildings that can be made secure. Finally, if a confrontation is unavoidable, Lucas encouraged the owners to advise their staff to fight back. 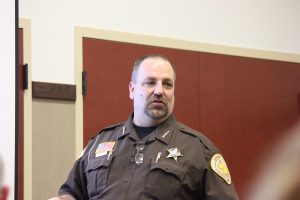 “A passive response is worse than a proactive response,” Lucas said, mentioning that statistics show a shooter is far less accurate when confronted by resistance. He also suggested everyone watch the “Run, Hide, Fight” video on YouTube that illustrates his advice.

The evening featured a bus trip to Rivers Edge Campground in Stevens Point, which included dinner and a “Best Idea” cracker barrel exchange. Among the concepts presented were: equipping security guards with body cameras; having a contest in which guests paint picnic tables; setting aside an adults-only, no-splash, after-hours pool time; filling a dunk tank with ice water for a summertime polar plunge; constructing an RC race track; and having a rock painting scavenger hunt.

Joel and Virginia Minton, owners of Deerhaven Campground just outside Stevens Point in Waupaca, said they look forward to the convention every year because it helps them “recharge their batteries” for the upcoming camping season.

The husband-and-wife team just added eight new sites to their 51-site campground, which is about 90% reserved for the year with seasonal campers.

“We only have a few sites left, although I do try and keep about five sites open for overnighters,” Virginia said. “That’s where you pick up your seasonals. We always tell them, don’t make a decision until you’ve stayed here for a weekend. That’s when we get them.”