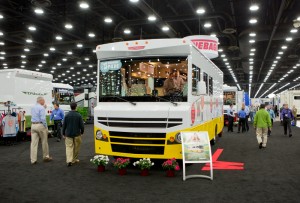 Like a few automotive, motorcycle and RV brands lately, Winnebago has taken its essential design cues for the Brave/Tribute from yesteryear – nearly 50 years ago — in developing an affordable Class A that blends a familiar “eyebrow,” a “Flying W” sidewall logo and a classic body shape from Winnebago’s first Braves and Chieftains with the basic elements of a thoroughly modern coach in terms of creature comforts and an up-to-date superstructure.

Designed to appeal to both new and existing motorhome enthusiasts, the Brave/Tribute since its initial public unveiling at the Pennsylvania RV and Camping Association’s (PRVCA) Hershey Show in September has certainly generated plenty of media buzz among RV consumers and industry veterans. Bob Livingston, senior vice president and group publisher of Good Sam Enterprises LLC, recently tested a prototype 26-footer for MotorHome magazine and found that people off the street were following him into gas stations to get a better look at what they thought was a renovated vintage 1967 Winnebago Brave.

In fact, Livingston says he never had more fun testing a unit than he did with that prototype Brave, which is only one of several reasons why RVBusiness has named this truly novel retro Winnebago Brave/Tribute motorhome RVB’s “RV of the Year.” The price-sensitive coach, retailing for $96,599 to $121,379, is available in three 26-31-foot floorplans on a 362-hp, V-10-powered Ford chassis.

“Speaking for RVBusiness,” said RVB Editor Bruce Hampson, “we felt it was important to recognize authentically original thinking on this kind of a scale because Winnebago has boldly stepped into a place in terms of marketing and product design that no motorhome manufacturer has gone before. The Brave/Tribute is a highly appealing and marketable new coach that will likely gain major traction among North American consumers before all is said and done.”

“The idea was really actually proposed by a small group of us – myself and a few others – over 10 years ago to the management that was in place at the time,” Potts told RVBUSINESS.com. “They just never warmed up to it and I was not in a position to take it any further. So it sat there in my mind — and in some sketches — through the recession, a time when we were just trying to survive. Then, after we started growing and I rose to a higher position in the company and started changing things around, the idea surfaced again, but this time through a different avenue. This time it was through Scott and (Product Manager) John Millis.”

What followed was a protracted period of trial and error which, after consulting some veteran Winnebago people whose tenure with the company dated back to the era of the original Brave and Chieftain, eventually led to a full clay mockup and a consumer debut at the Hershey Show.

“Nobody else in the motorized industry can do this, at least in a recognizable way like we have,” concluded Potts. “This coach is going to appeal across a very broad spectrum of buyers and if you’re the kind of person that wants to be noticed when you’re behind the wheel, this is the coach that’s going to do it. It’s very unique and people want to approach you. When you’re associated with the coach, people want to talk about it. They reminisce about the ones that they camped in when they were kids, the ones their parents have, the one they saw restored. It truly is iconic and hopefully we’re successful in modernizing that and bringing it to today.” 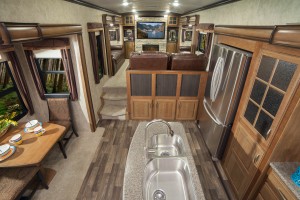 RVB’s January/February issue will also showcase two runnersup for “RV of the Year,” as well as the rest of its “Top Debuts” for the 2015 model year. They include:

Runnerup: Keystone Montana 3791HD Rear Den Fifth-Wheel: When it comes to camping on a large scale — and we’re talking big fifth-wheels here — it’s really all about the floorplan. How the unit is designed and how the end-user can maximize its comfort is what closes the sale. On both counts, Keystone RV Co.’s Montana 3790 and 3791RD models fit the bill. With theater seating, 40-inch flat screen TV and electric fireplace, the Montana’s rear-den design not only creates a separate living zone, but one that’s comfortable enough that you might actually forget you aren’t seated in your den at home. (By the way, the only difference between the two floorplans is that the 3791 boasts a residential refrigerator.) 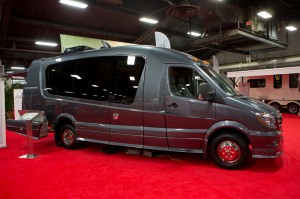 Runnerup: EverGreen’s Imperial Class B: While their actual sales numbers might pale alongside their bigger brethren, there’s no denying the emerging popularity enjoyed lately by Class B motorhomes. Why did we select EverGreen RV’s Imperial? Because it’s not just what the Middlebury, Ind., company did on the inside — it’s what it accomplished with the Sprinter-based camper’s exterior as well. Designed in conjunction with Andy Mauck of Mauck Specialty Vehicles, the Imperial’s widebody incorporates a one-piece radius fiberglass roof and walls with panoramic windows on either side. In so doing, it takes the classic Class B silhouette in an entirely new direction.

The Rest of RVB’s Top Debuts (in alphabetical order):