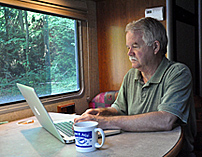 Editor’s Note: The following is a column by RVtravel.com Editor Chuck Woodbury profiling Dawn Bitz, who aspires to be the “Martha Stewart of RVing.

I met Dawn Bitz at the National RV Industry Trade Show in Louisville in December. We sat next to each other at a cocktail party. When she told me she wanted to become the “Martha Stewart of RVing,” I knew this was someone I needed to know better.

She was in Seattle last week where we met at my office before heading off to a nearby cafe for breakfast to plot how we might work on some projects together. She arrived in a beautiful cocktail-type dress, with black high heels, wearing a fancy necklace. “Don’t let this dress fool you,” she said, explaining that beneath her elegant exterior was a tomboy. “I came to my marriage with more tool belts than my husband,” she explained. “And none of them were pink.”

She grew up on a horse ranch in rural Granbury, Texas, where it was easy to be a tomboy. Her family owned a number of RVs — motorhomes, travel trailers, fifth wheels and a truck camper. She was hooked on RVing at an early age.

Two years ago she quit a successful career in the medical devices industry. The decision came quickly. She was headed out on a family camping trip. The “Martha Stewart” in her demanded nice camping gear. She searched, but found little that interested her. A lightbulb went off: Start a business where she could offer one-stop shopping for stylish camping gear. A month later, she left her job.

Today, she operates Grasshaven Outdoor from an office/warehouse in Boulder, Colo., where 600 items are available for enhancing a camping trip. Everything is portable and in most cases unbreakable. There are elegant bowls and dishes that are dead ringers for fine china. But, nope, it’s shatter-proof acrylic (like plastic). I showed her the plastic wine glasses from my motorhome. I had not realized how ugly they were until I saw the disturbed look on her face. Dawn promised to replace them — perhaps her attempt to save me from embarrassment at my next campground pot luck.

This enterprising woman has her fingers in more than one pie. She is working with select RV manufacturers to provide “camping kits” that can be offered to new buyers. Everything they will need to outfit their recreational vehicle will be included — stylish dinnerware, pots and pans, linens, outdoor accessories: all the necessities — nice ones — for RV living. She has already done some work with Winnebago (see table setting above from a Winnebago motorhome at the National RV Trade Show).

In addition, she is setting up Grasshaven stores at select RV resorts and dealers. If you’re in Colorado, drop by her first store at the Garden of the Gods Campground in Colorado Springs. Another store will open soon at Jack Sisemore Traveland in Amarillo, Texas. Dawn is also pursuing a TV show about “glamping.”

When it comes right down to it, her mission — and she’s passionate about it — is to bring glamour to the outdoors. She’s aware that some people, most often women, perceive camping as dirty, uncomfortable and an ongoing battle with bugs. She knows better and wants to change those perceptions.

Before she left, we agreed to work together on some video projects for our RV Travel Channel.

This woman is going places.