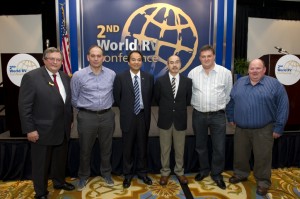 The Recreation Vehicle Industry Association (RVIA) hosted industry executives from around the globe at an unusual, social-networking and intelligence-gathering event — the 2nd World RV Conference, Jan. 17–20 at the Marriott Waterside Hotel in Tampa, Fla.

The conference, held concurrently in Tampa with the Florida RV Trade Association’s (FRVTA) Florida RV SuperShow, drew 216 business people from the U.S. and Canada as well as Europe’s Common Market, China, Australia and more remote RVing locales like Russia, Brazil and South Africa – 16 countries in all.

That exceeded the trade group’s own conservative projections, according to Jay Landers, RVIA’s senior director of government affairs and chairman of the 2nd World Conference, the first of which was held four years ago in Germany.

“We were very pleased with the turnout,” said Landers, who said he hoped that new business connections might spring from the Florida meeting. “It slightly exceeded our expectations in terms of attendance. Originally, my big concern was, putting on an event like this, you have no idea whether people are going to actually travel tens of thousands of miles to come to the function. And so my biggest fear was that we would plan a big conference and 75 people would show up. Through our persistence, we were able to get commitments from a number of other folks that ultimately came.”

Converging for a full schedule of informative workshops, speakers and social interaction — including a dinner cruise around Tampa Bay — were RV manufacturers, suppliers, dealers, campground people and trade association representatives. Together, they shared market information and statistics, discussed technical issues and standards, and explored how RV companies can work together in an increasingly interconnected world market.

Beyond the considerable novelty of the event itself, three consistent themes seemed to emerge – the first being the relative health of the U.S. market versus Europe’s, which continues to trail America’s recovery from the global recession, especially in southern Europe.

“Well, I think we have a really good story,” RVIA President Richard Coon told RVBUSINESS.com. “I think if you sat there and listened to the presentations of the Europeans, you’ll find that they’re back on their heels economically. So are some of the other markets that we’re hearing about. And yet the U.S. is moving forward and doing much better from an economic standpoint with regard to both our manufacturers and dealers – coming out of a bad time and continuing to grow.

“And that gives a lot of people hope because what you’ll find is that Europe traditionally has followed U.S. markets by about six or eight months,” added Coon, who presented an overview of the North American marketplace. “So, I think the people who were here from throughout the world want to see the United States do well and come back, and that gives them a lot of encouragement that things are going to get better. When the U.S. economy gets better, the whole world gets better.”

Another pervasive conference theme had to do with the younger generation in a variety of countries and their likelihood to embrace camping at any level, given their short attention spans and unpredictable buying habits.

“Europe has an aging customer base and one of the biggest challenges that we’re going to have in the coming years is to link the generations and make sure our children and the children of our children continue to go RVing,” said Thetford Corp. CEO Stephane Cordeille, who’s based in Etten-Leur, The Netherlands and was a presenter for the round of plenary sessions at the conference.

The third major talking point among the attendees: A general consensus among some of the non-North American attendees that there’s a need to work better together within given countries and especially among Europe’s varied Common Market nations to develop a conjoined message to the masses, not unlike that of the Go RVing Coalition’s marketing campaign in the U.S. and Canada.